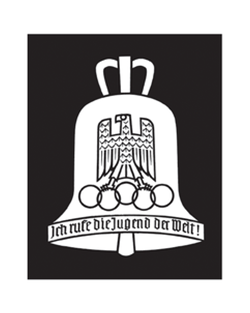 In 1933 the Germans started their preliminary work for the 36 Games. However, at that time the German Gymnastics Association did not belong to the International Federation. So contact was made by attending the World Championships in Budapest in 1934 and they gained membership to the FIG. This was the first time that the German men had competed as a team competing against 12 nations. It would be the first time that the women would have entered international competition.

A new venue was constructed for the gymnastic events, the Dietrich Eckart Theatre. (This is now a venue for pop concerts) Seating was erected around an amphitheatre and a stage with a canopy was made. This was to enable the events to be carried out under cover in case of bad weather. At all up until this date the gymnastics had been held outside. The venue was built along with other Olympic venues such as the main stadium and the open air pool, in the Olympic Park.

True to fashion the Germans made very good preparations in terms of preparing the compulsory exercises. They made contact with the Swiss to draw up the men’s exercises and a lady from the International Federation from Czechoslovakia choreographed the women’s exercises. The exercises were written and drawn out plus a film was produced that was sent to all nations in 1935. Careful attention was made regarding the vocabulary used in all the writing of the exercises, the exercises were translated into 5 languages.

For the first time, the men would work floor exercise, prior to this they had only worked 5 apparatus. There had also been a combined team drill, which would now be dispensed with. This then was the introduction of the Olympic six, the pattern of disciplines for the future, Floor exercise, pommel horse, rings, vault, parallel bars and high bar.

The women would work three pieces of apparatus, the beam (only 8cms wide, not the 10 cms that we have today) vaulting horse and bars, parallel and a new innovation the asymmetric bars.

THE ROUTINES FOR WOMEN

There would be no springboard for vaulting and the horse height just 95cms. This is the set vault.

The 8 members of each team would also have to do a group floor exercise one with hand apparatus and one without. The organising committee liaised with gymnasts, judges and manufacturers over the production of the apparatus.

In the January Gymnast magazine, the women’s set exercises were published in full with the addition of advice on the performance from first English champion Dorothy Billson. These exercises were also to be used for the English Championships. However come the March magazine, some shock information was given, the piece headed Olympic Fund Appeal, states the following:-
“It was hoped that both men and women would be sent and arrangements were made for the training of both teams but now it is found that the BOA cannot send two teams on account of expenses. After a good deal of anxious thought and discussion, it has been decided to send the men’s team to represent Great Britain at the Games.”

This must have been a great blow to the women and all women’s training must have ceased and it was up to the women to do their own personal training for the up and coming English championships.

It had been decided at the last moment to send the British women’s team to Berlin instead of the men. The men’s team had been in training and expecting to go, but were thought not to be of sufficient standard. Edna Gross remembers wryly:

“As usual our country was short of money, so it was decided to send only a men’s team to the Olympic Games. Just six weeks before leaving England the Association decided the men couldn’t cope with the set exercises so it was decided to train up the women! I had only been married three months so cried copiously when we set off. Soon cheered up, particularly meeting up with some of the athletes.”

Part of the men’s team left behind. This photo was taken in Sutton Coldfield where they trained at the Sutton Coldfield Grammar School. Every morning would start with “opening exercises, bending and stretching by Mr Bradley (Alfred Bradley English Champion) who was a great believer in stretching the hamstrings, much to the discomfort of some of the men!

“Heavens! What had I let myself in for?”

Brenda Crowe described the invitation to attend the Berlin Games as “a bit of a shock,” and thought: “Heavens! What had I let myself in for?”

She remembered that the newspapers of the time had some interesting comments to make:  “Just before we left, a newspaper wrote: “Amazons train on porridge. Cream buns and chocolate are not barred, but smoking is. Britain’s gymnasts reveal their secrets.”

As the tallest of the team was only 5 feet 4inches, the women gymnasts understandingly did not like to be referred to as ‘amazons’! While most of the women in the Berlin Games wore shorts, the team of British gymnasts were dressed in skirts and long stockings. This was the regulation dress for women in the Amateur Gymnastics Association. Officials considered that short dresses were more graceful and becoming than the shorts worn by women athletes. Looking ‘feminine’ was still a priority. (I am not sure that they wore stockings)

There was a piece in The Gymnast magazine advertising a trip to Berlin for the purpose of seeing the Games from the 10th – 12th August. Cost for 2nd class rail boat and 7 days hotel ranged from £12 to £16.

Travel from the USA was not quite so simple. Frank Cumiskey recalls that they left Manhatten on July 15th to travel to Europe. They set all their equipment up on deck and started training. However, they had to train alongside the likes of Jesse Owens as all the team was on the ship. The women on the beam while the ship was pitching. 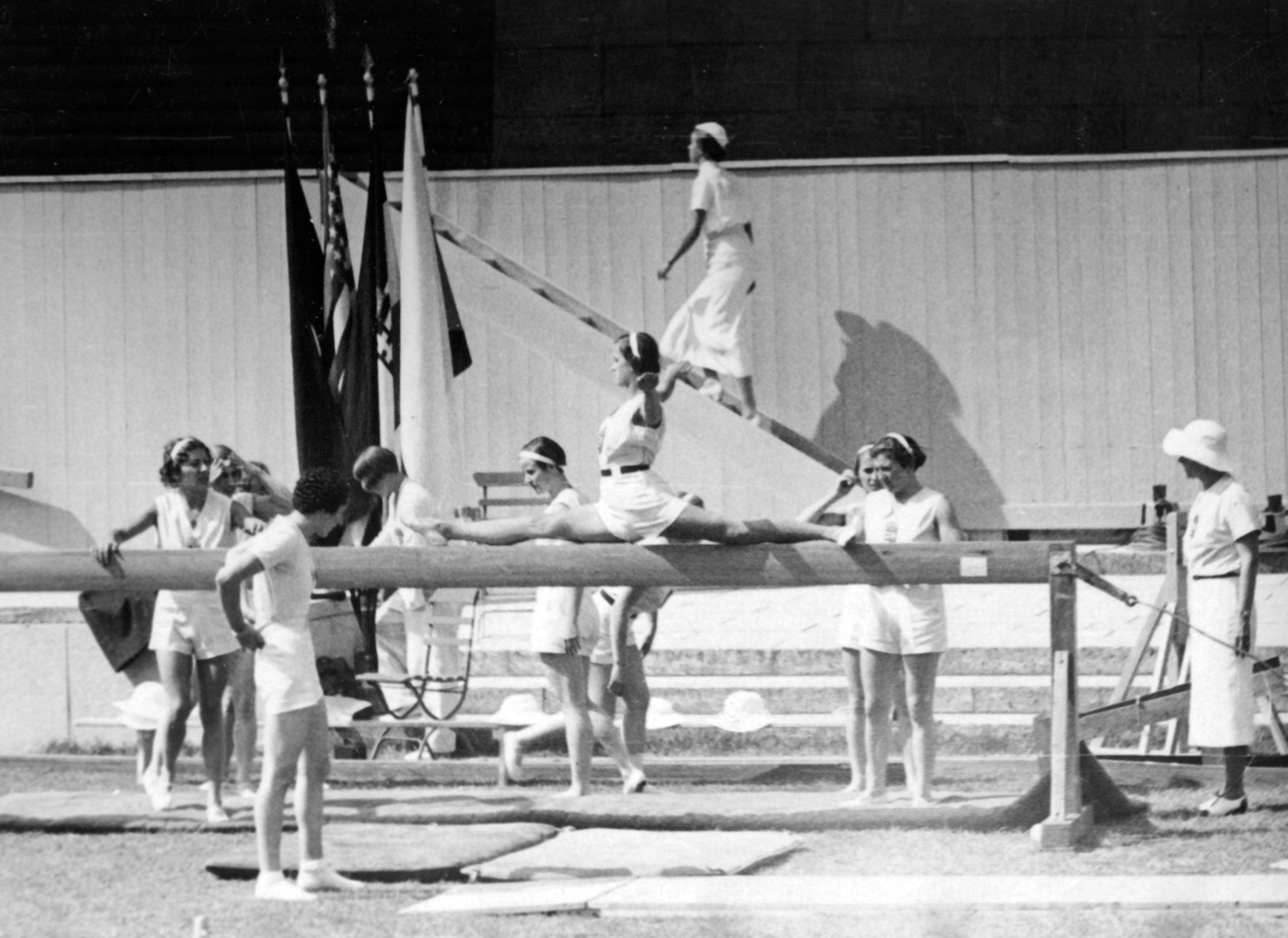 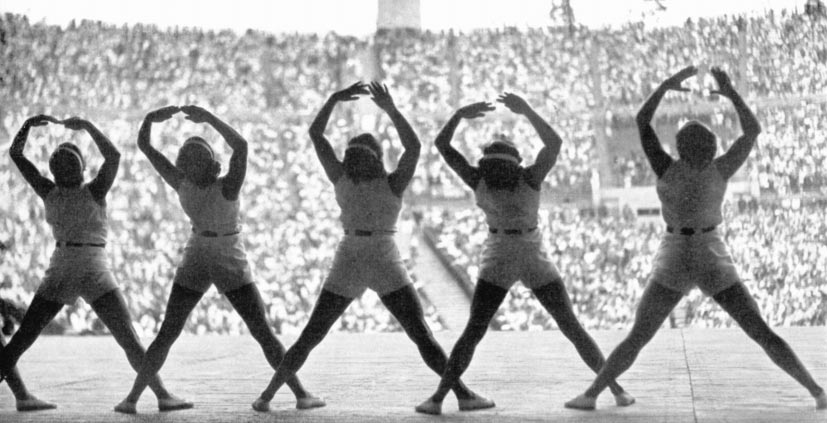 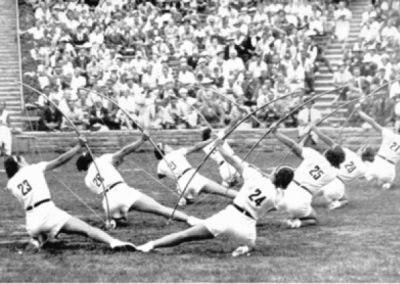 The Polish team with their hand appartus. 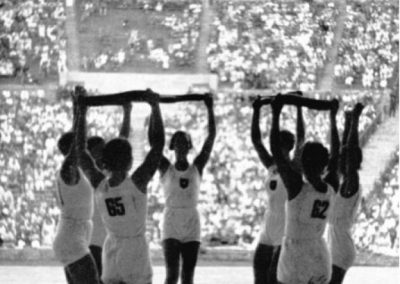 The German team with clubs. 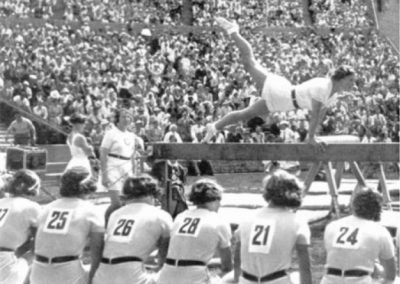 The Polish team on beam performing before a packed stadium 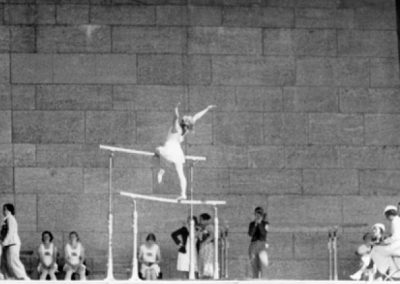 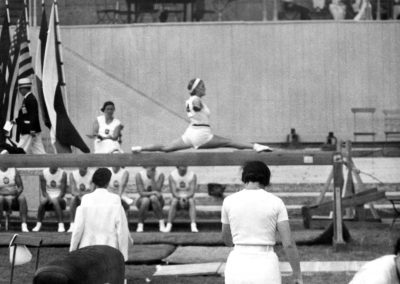 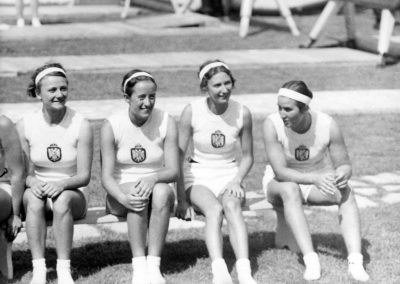 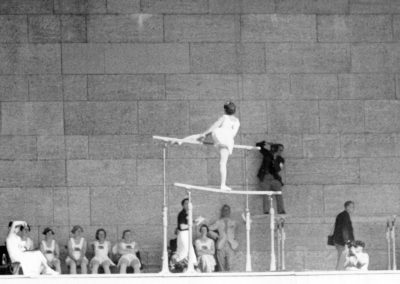 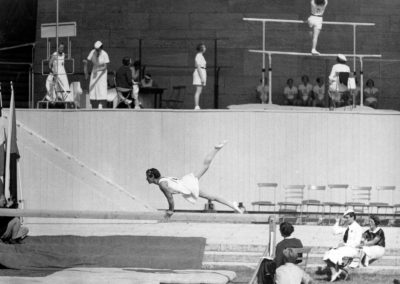 Again, taken from A Proper Spectacle.

The Amateur Gymnastics Association thoughts that the British team was disadvantaged – not by the skirts, but because they were drawn to compete first in each event and because a new style of work on parallel bars had been decided upon for the Olympic competition. This information came too late, they thought, and wrote in their Olympic report that “They would have come higher up the list if they had been given the compulsory or published exercises sooner, leaving more time to practise.” This fact would surely have applied to all competing teams. Brenda Crowe described the German team as ‘excellent’ and felt rather awed by their extraordinary level of performance. The British team had trained hard, but at the end of an exciting competition, Germany won the gold, with Czechoslovakia taking silver and Hungary the bronze.

The British team came 8th with Mary Heaton (Hoddy) top scorer coming in 51st. It seems that we had a lot of work to do if we were to compete with the best in the future.

Taken from the Official Games Report.

The technical installations, such as the announcement board and the loud-speakers which announced the results, proved very satisfactory. The discussions between the judges preceding the contests also were most helpful. It was discovered that the very exact descriptions of the exercises in the regulation books had prevented all misunderstandings. Therefore, in the judges’ discussions, there was no need to consider the exercises themselves. It was not necessary for the jury of appeal to meet once during the men’s contests. This was proof that there was the closest possible uniformity in the judges’ understanding of the exercises.

With 14 teams it was decided to divide them into two groups for a preliminary round. As a result of this, the bottom ten teams worked in 2 semi-finals of 5 teams whilst the top four nations worked in a final. 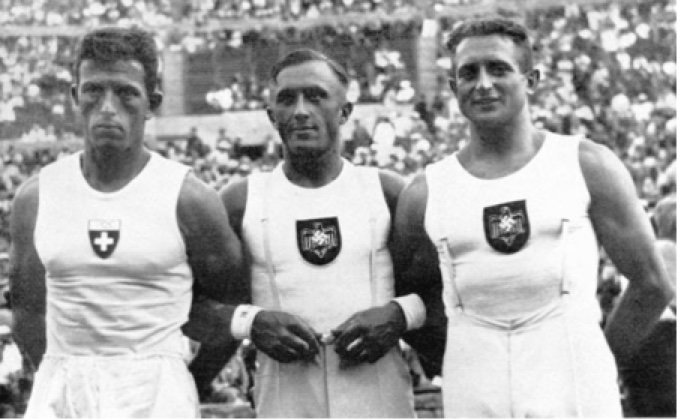 In the initial Schwarzmann (Germany) was in 1st place the Swiss gymnast Eugen Mack, 2nd and Matthias Volz (Germany) 3rd. In the final competition, Schwarzmann won gold, Mack the silver and Konrad Frey Germany the bronze. 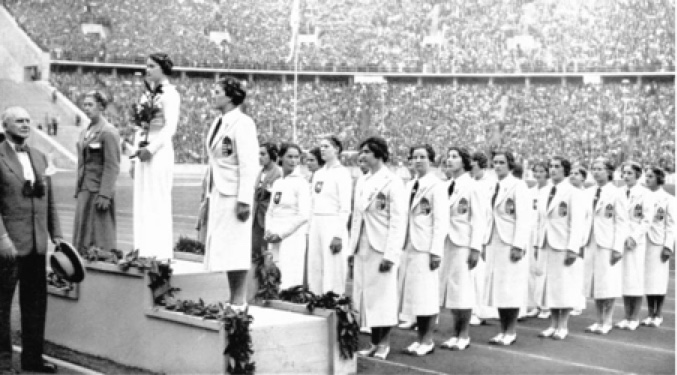 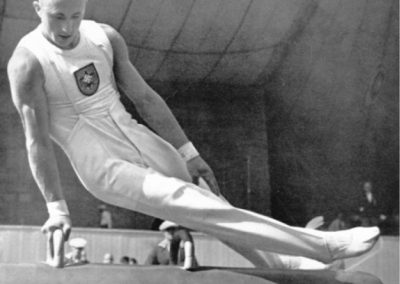 In the final competition, Schwarzmann won gold, Mack the silver and Konrad Frey Germany the bronze. 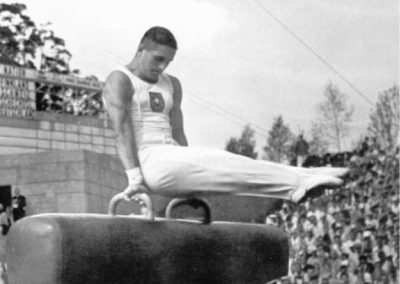 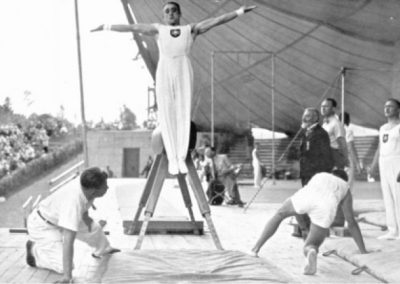 The winner of third place on the long horse, Matthias Volz (Germany). 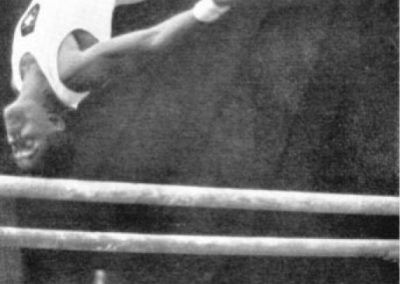 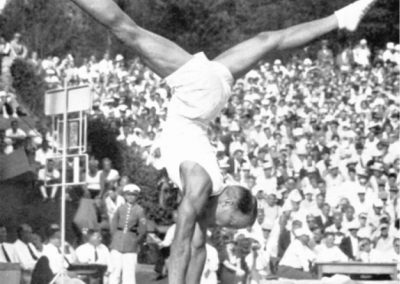 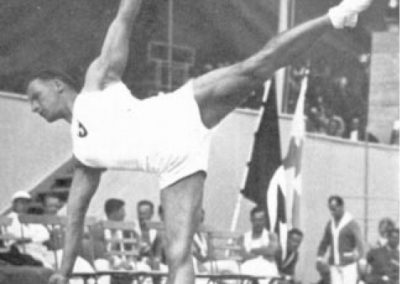 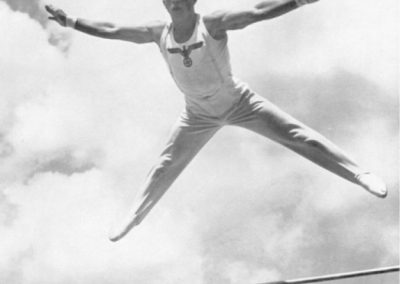 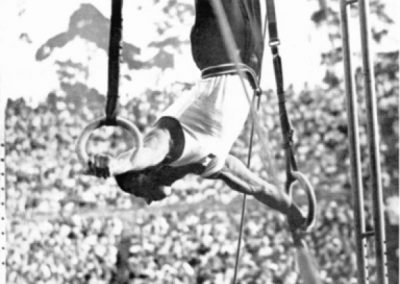 Hudec wins the rings for Czechoslovakia. 2nd is Leon Stukelj Yugoslavia. Here he was 37 years old having competed in 1924 where he was the overall winner and then 3rd at the 1928 Olympics. In 1992 at 93 he watched the opening ceremony he was able to see his nation Slovenia march behind their own flag for the first time. In 1996 he was invited to Atlanta where he amazed the crown by bounding onto the stage age 97. He died just before his 101st birthday. He is a gymnastic legend.

From the Olympic report

“It may be said, however, that the men’s and women’s gymnastics contests at the Olympic Games of 1936 were the greatest gymnastic event the world has ever seen. The splendid achievements of the competitors, the exciting course of the contests and the interest in the contest of approximately 100,000 spectators combined to make the event unforgettable.” 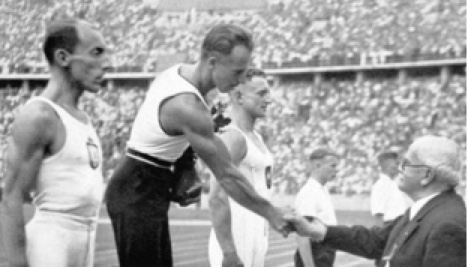 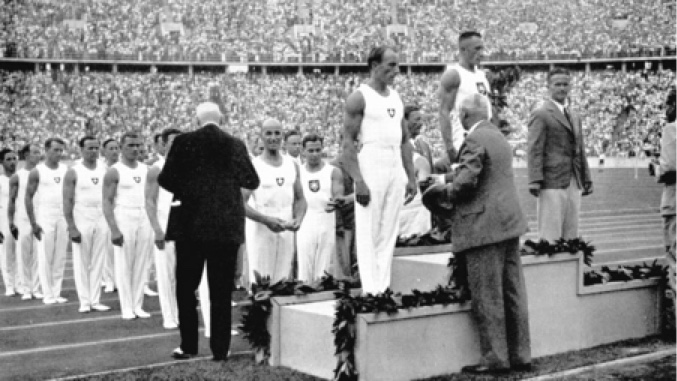 I visited the Olympic Stadium in October 2018 and was able to find several references to gymnastics at the Games. There is an exhibition in the Bell Tower opposite the Marathon entrance to the stadium where I copied the photo of the British women performing their group exercise. There was also reference to the German Jewish Flatlow cousins.

When Alfred Flatow returned to Germany from the 1896 Athens Olympics after winning three events and coming 2nd in one other, he was banned from competition for 2 years because the Olympic Games was an unauthorized international event. Because he was Jewish, Flatlow was deported by the Nazis to the concentration camp in Theresienstadt in 1942. He died there on December 28th. In 1997 the Berlin street the Reichssportfeldstrasse leading to the stadium was renamed Flatowallee in honour of Alfred and Gustav Felix, his gymnastic cousin who also died in Theresienstadt in January 1945.

In 1928 in Amsterdam, the Dutch ladies’ team won the event. Their team included four Jewish members. The Dutchmen and women did not compete in the 1936 Olympics as by this stage there were concerns over the treatment of Jews in Germany. Three of their 1928 team died in 1943 as a result of the Nazis.