Main picture – Arthur Whitford coaching a member of the GB Olympic team in Hyde Park prior to the Games.

Great Britain was awarded the 1948 Olympics. The games were originally due to go to Helsinki in 1940, the IOC wanted to remain above politics. They had even encouraged the Germans to prepare for the winter games at Garmisch – Partenkirchen two months after their army had invaded Poland in September 1939. The Summer Games in Helsinki were not abandoned until May 1940 – a full 6 months after Finland had been invaded by Soviet forces. The stadium and preparations for the games were finally abandoned.

By 1944 it was clear that the IOC could start to plan for the Olympics of 1948. Helsinki was too damaged so London in spite of their problems was duly elected before the war had ended.

If London was ill prepared then so was gymnastics. There were no full-time facilities for gymnastics where gymnasts could train regularly and there was no good apparatus in the country. The men gymnasts are famously shown training in London’s Hyde Park.

A trial was held for the men in the shape of the English Championships in April 1948. It was here that a German prisoner of war made his appearance. On 3rd April 1948, Helmut Bantz introduced himself at these championships. In very creditable English, he talked about former tournaments where he had beaten the German victor of the 1936 Olympic competition, Albert Schwarzmann. To prove his story, he performed his old routine which – in spite of the fact that he had not practised for some years – went very well. He was even able to perform the Olympic routine set out for the games in London. The official coach of the British team, Arthur Whitford, forthwith sent his ‘best regards to the new friends’ via the ‘Turnerbriege’ of Josef Göhler. Moreover, the German gymnasts were informed that ‘their Helmut’ was most likely to take part in the 1948 Olympics. From this day on, ‘Henry’ attended the gymnastics squad training sessions in London every two weeks. Although Bantz was considered de facto head coach, Whitford kept the official title. The newly-established friendship was also extended to the ‘voice of German gymnastics’ Josef Göhler, who received an official invitation to attend the Olympics. (Robin Streppelhoff Peace in Practice Helmut Bantz at the Olympic Games. ) 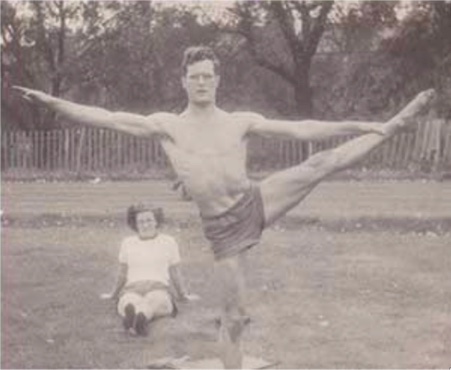 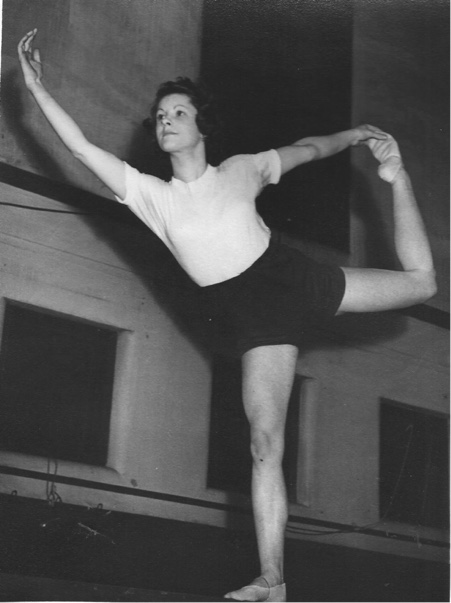 Joan Airey, a London gymnast had to train in an old brewery where the beam was balanced on a beer barrel at one end. 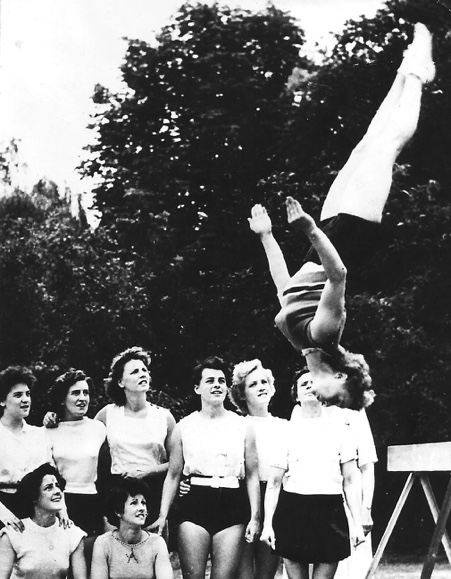 Pat Hirst demonstrating her beam dismount with team hopefuls and Carrie Pollard looking on. Once again training is outside.

The men’s team with Helmut Bantz extreme left. Centre Bill King team manager and to his right Arthur Whitford. Frank Turner for some reason is not in this photo although he was part of the team 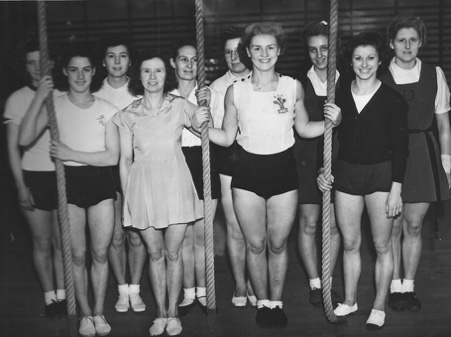 This must have been squad training, as gymnasts from Wales and London are in the photo including Carrie Pollard who was the team coach. 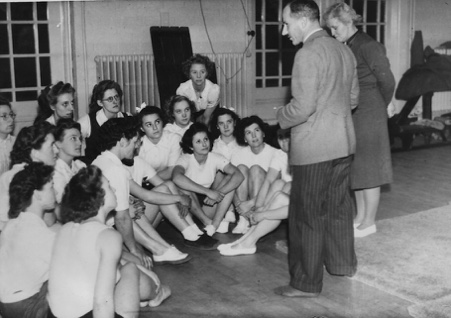 Team talk, Olympic hopefuls listen. Centre back is Pat Hirst and seated just in front of Pat in row is Joan Airey.

Trials were held for the ladies but we have no record of where that was but presumably the English Championships would have been one trial, Clarice Bell was the champion that year but for some reason, she did not compete at the Games.

Finally, the teams were selected

The Men’s team was taken from these men.

The Ladies’ Team – with no record of a trial 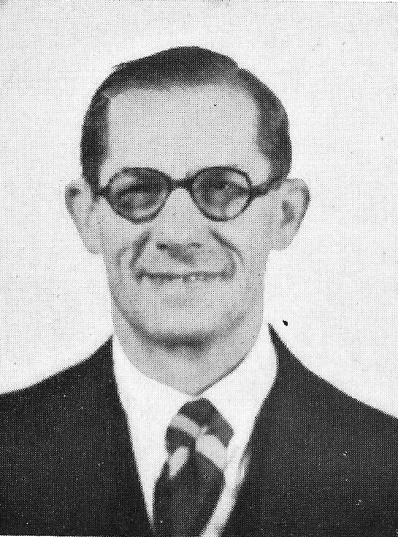 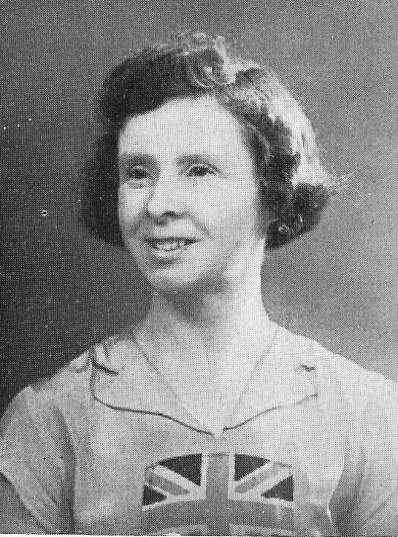 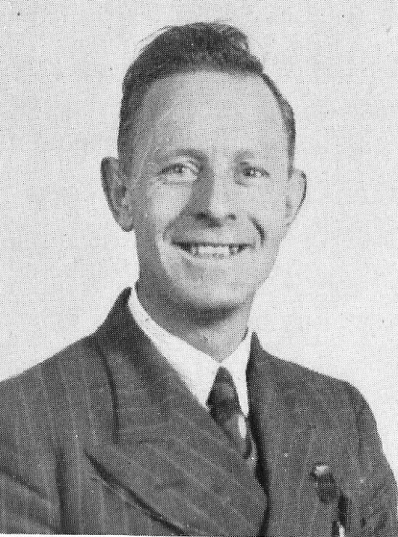 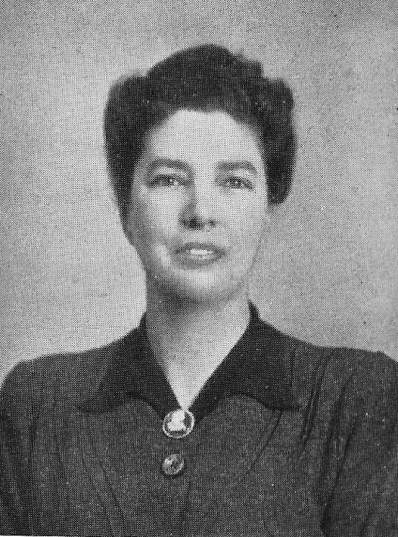 The gymnastics scheduled to take place at the Empire Stadium Wembley. FIG had insisted that the event held outdoors at the stadium, even though it meant that all the equipment had to be moved by for the evening football matches. They had clearly forgotten that when twenty-four British Gymnasts had carried out synchronised drill exercises in Antwerp in 1920, the heavy rain and extreme cold had led to their withdrawal before they could finish their routine. The three days of gymnastics were programmed for the second week of the Games, by which time the first few days of glorious weather had given way to severe storms. The decision was made to postpone the event by three days and move to Hall at Earl’s Court. This caused a headache for the organisers but possibly helped the spectators as they were now so much closer to the gymnasts. The downside is that there were very little photographs taken of the event. my guess is that the lighting was so bad. There are two photos of a young Italian girl which I believe were taken by my father at the demonstration which followed the days of competition.

GYMNASTICS The Women’s Events
The women’s events took place at the same time as the men’s but before commenting on these, it is necessary to record the deep sympathy felt for the members and friends of the Czech women’s team. On arriving in England, one of the team was taken ill and, although everything possible was done, the patient died in hospital just before the team was due in the arena. Under these depressing circumstances it is all the more credit to the team, which included the sister of the dead girl, that they should have come out on top in one of the most severe tests of steady nerves in the world. The Czech women’s team finished with a lead of 4.95 points over Hungary, the runners-up, and once again vaulting made all the difference in the final result. The set vault, although difficult to perform perfectly, could in fact be done with several faults, and there is no doubt that the lady judges had to watch this most carefully. It was on the balancing beam, however, that the most charming women’s work was seen. The feats of balance and movement shown in this work held the spectators breathless. As the women’s work had to take place at the same time as the men’s it was considered in the Federation meeting that the music used for the women’s team exercises would interfere with the men’s concentration. It was therefore decided that the men should cease work for the few minutes taken by the music. As it happened, however, many of the men took no notice of the music, which in any case was never very loud, and in fact the only interference to the competitors by noise came from the reverse direction. The Finnish men’s team were on the horizontal bar, whilst the British women were on the swinging rings. One of the men had just finished a beautiful voluntary exercise, and such a roar of applause went up from the spectators, that the girl on the rings was startled and put ” off her stroke ” just as she was preparing for the finish. The finish was called a “Saut Perilleux,” so it was with great relief that she was seen to land safely, although she undoubtedly lost some marks through this incident. Although there was no individual championship for the women, certain outstanding competitors must be mentioned. Zdenka Honsova, of Czechoslovakia, scored the highest number of marks on all the apparatus combined, including first place on both beam and rings. This was a very fine performance, achieved with all the certitude of the practised and experienced gymnast. Pigtailed Laura Micheli of Italy, a serious little girl of 17, was placed third in total marks. What an achievement at that age against so much experience! On one occasion, when she had just finished an exercise perfectly, she forgot all her seriousness and ran back to the team with kisses all round! (the gymnast that came 3rd in the Czech team was

Vera Ruzickova who had been the travelling reserve. Years later she was to visit the UK many times giving coaching courses and building a friendship with June Groom and Pauline Prestidge. Return visits would be made by various British clubs to Brno Gym Club for summer camps.) 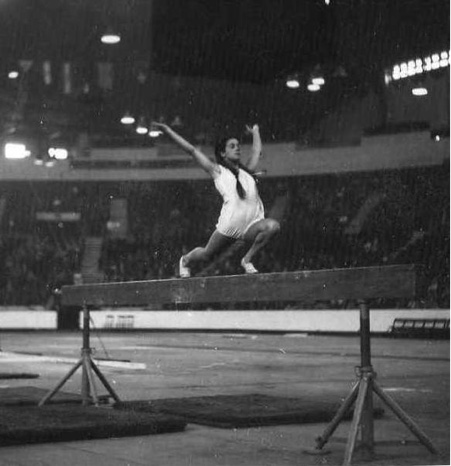 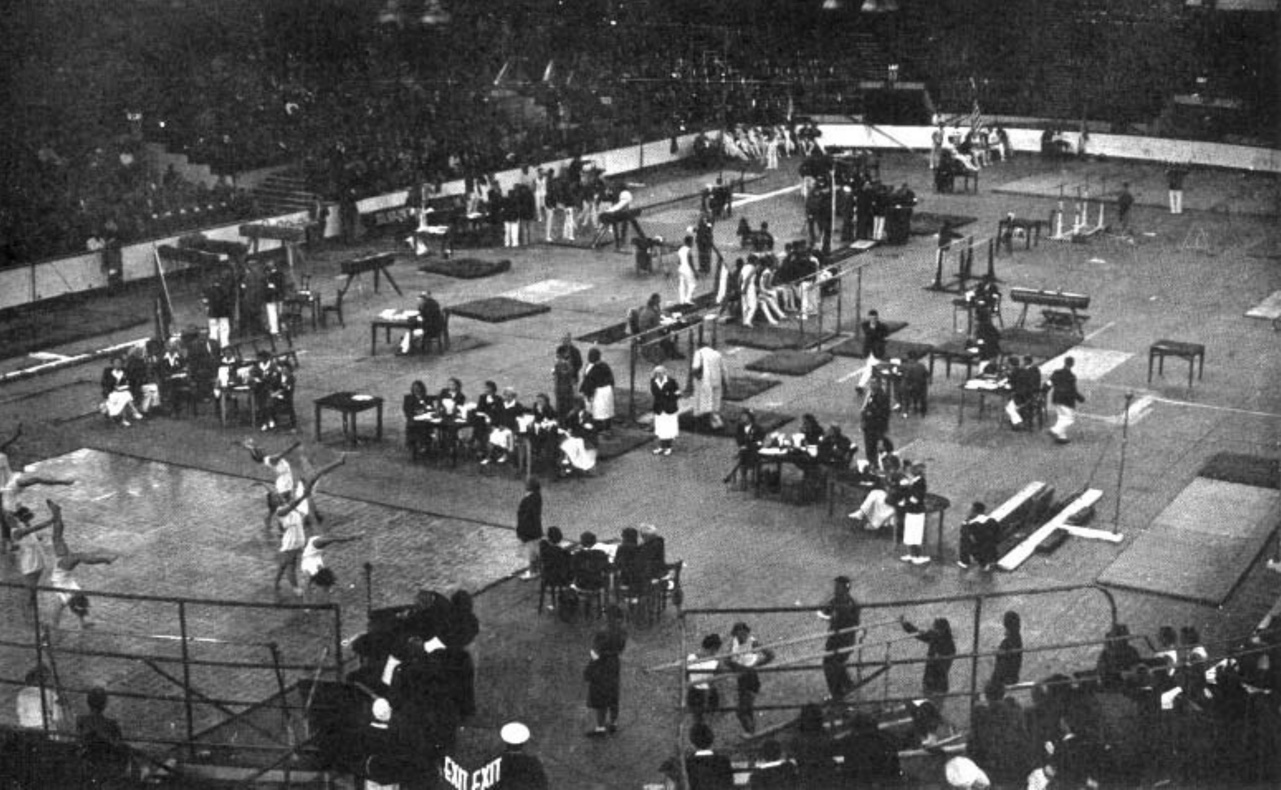 The whole event was rather chaotic due to the fact that the all apparatus was on the arena. Music was played for the women’s team exercises and it was thought that this might put the men off and was suggested that when the music was on that the men would pause. Finally, this did not happen although Frank Turner recalled that it was rather off-putting if you were trying to concentrate on the bar or rings.

Ted Simmonds of the AGA and the arena manager had always wanted to stage the event at The Empress Hall but not with only 3 days notice. He pointed out after the event that ‘Indoors, spectators were able to follow more closely the beautiful work done by the teams, which provided such a feast of poetry in motion that the audience found it difficult to decided what to watch.

The judging, especially for the women was still rudimentary. US team manager and former Olympic gold medallist George Gullack complained:’ A number of officials favoured their own countries and possessed scarcely any working knowledge of the sport. This would have been very evident as regards the bias, as scores had to been shown by the judges simultaneously.

Jim Prestidge recalls an incident when a team was just about to begin its pommel horse competition. The head judge immediately objected to the horse that the team had brought along, it was not acceptable. So panic and confusion followed as the team rummaged among an assortment of odd-looking pommel horses to find one that suited.

The President of the FIG Arthur Gander said. The first post-war international competition was held in London in 1948. The performances were practically the same as those before the war.

Negative remarks: Great chaos in the organization, as much from the organisers as the FIG authorities: total lack of competition requirements and evaluation; each nation brought their own apparatus resulting in inconveniences and so on…

It is recorded many times that Joan Airey was asked to perform her vault at the exhibition, following the competitions, as had there been medals awarded for women on individual apparatus as for the men, Joan would have won a bronze medal. Apparatus had to be brought in from Switzerland for the Olympics as there was none manufactured in the UK. Teams were allowed to bring in their own apparatus if they wished and so many brought in their own special spring board. My father relates that the leading vaulter Karin Lindberg from Sweden used her special spring board. The American Clara Schroth followed setting up her own special board. It was then the turn of Joan. The official asked, Which board Miss Airey? Back came the reply, ”anything will do” which just typified the way in which she had trained, on any old bit of apparatus.

Cissie Davies from Swansea was our highest placed gymnast. She could elephant lift which was a rare thing for a girl in those days.

The women’s competition consisted of Beam, Vault with springboard (this would have been with pommels) swinging rings, all with set & voluntaries, then the team exercise with 8 gymnasts with & without hand apparatus. This score was added to the gymnasts’ combined individual scores.

GB Men’s team in the competition hall, 9 gymnasts are shown here in The Empress Hall. The three men together in spectacles are left to right, Ken Buffin, Bill King and Helmut Bantz. In front of Helmut is Arthur Whitford. Jack Whitford who broke his arm before the event so did not compete is not shown 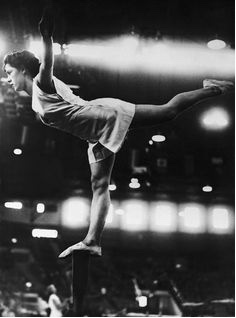 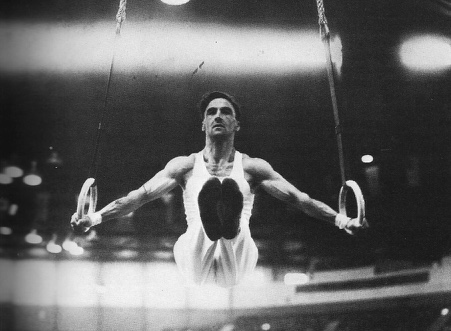 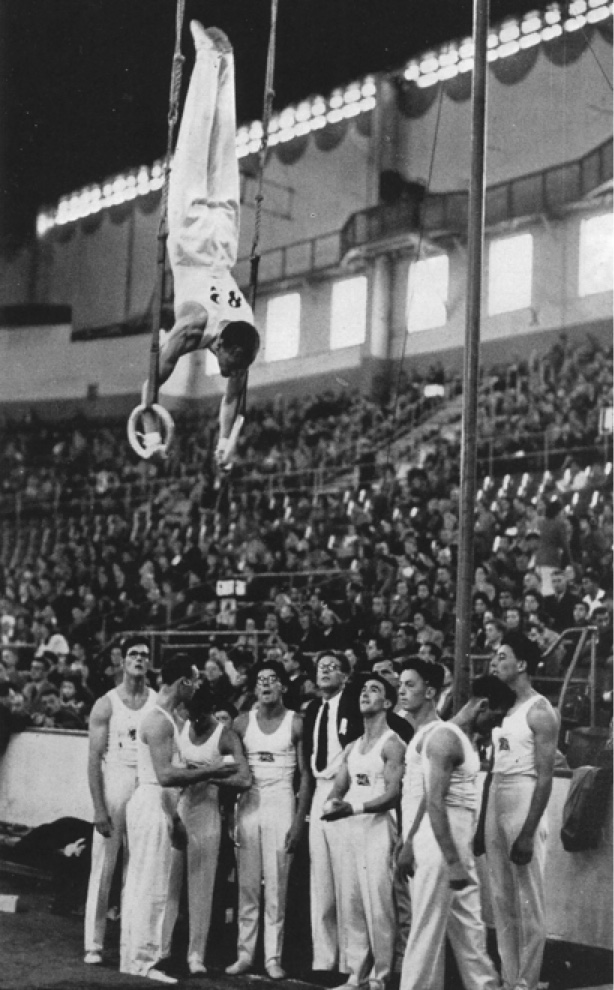 Thanks to Marjorie Carter for help with this article