Arthur Whitford was first introduced to gymnastics at the Sketty Church Lads’ Club in the suburb of Swansea where he still resides. He started off in the new September season, a very thin little lad with a lot of confidence. When the annual display of the club took place in the following January, he was placed in the star role as the ‘Boy Hand-balancer’. The next season, fate struck what seemed to be a cruel blow to this young enthusiast, as the gymnastics bug had really bitten deep already. The club leader, the late Rev. N. H. Pacell, left the district and the gym side of the club’s activities went out of existence.

After a lapse of about two years, this frail lad, anxious to grow, was taken by his cousin to the Swansea Y.M.C.A.

As most old gymnasts will remember, the Swansea Y.M. gymnasium physical director was that great trainer of international gymnasts, Walter Standish. Needless to say, Mr Standish almost immediately singled out young Whitford as a potential top notcher and, indeed, within a fortnight of being a member of the Y.M., Arthur gained a place in the club’s boys’ team which were to meet Newport in the final of the boys’ team championship of Wales. The team did not win, but this new member of the gym came out top marker of all competing.

This competition took place at Dale End YMCA in Birmingham, then a stronghold of gymnastics, and out of an entry of 26 this mere boy gained fifth place. Next year would be Olympic year, and home from Birmingham, Walter Standish decided that a training plan was important for this great event. Arthur’s father, a great athlete in his day, came in on the plan and decided that a more concentrated effort was necessary and decided to have an open-air gymnasium built for extra practice Only rain prevents practice, the cloudiest day or the hottest made no difference, as in front was the great goal of the Olympic Games. 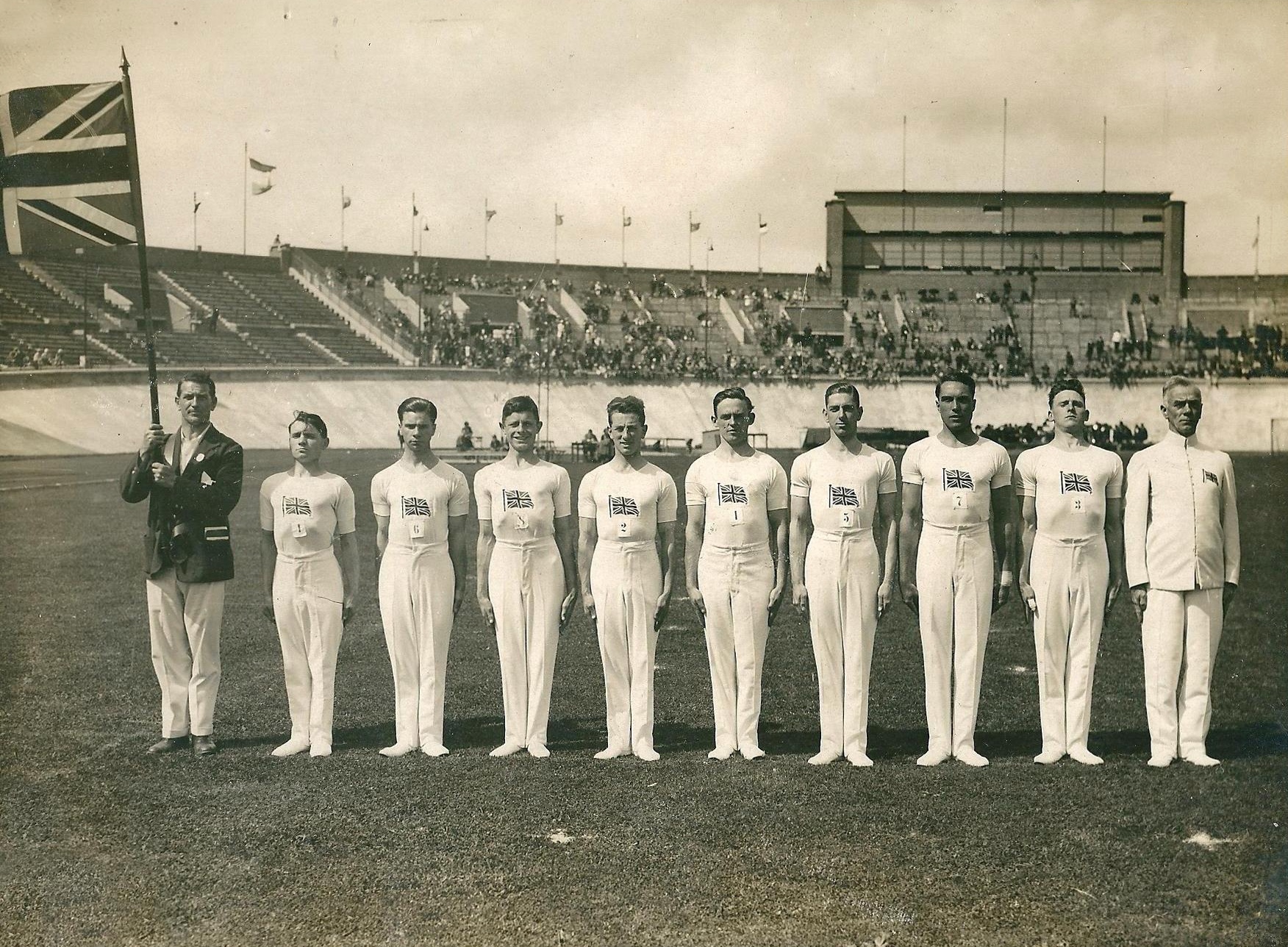 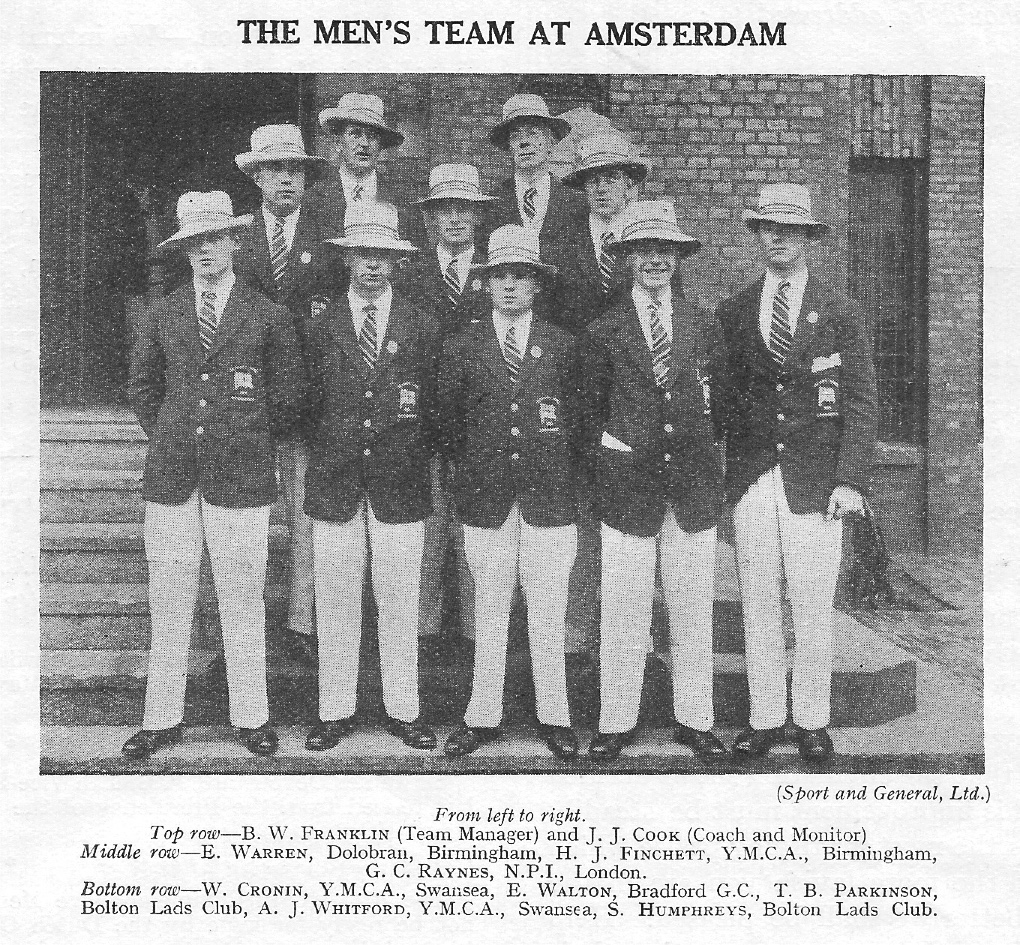 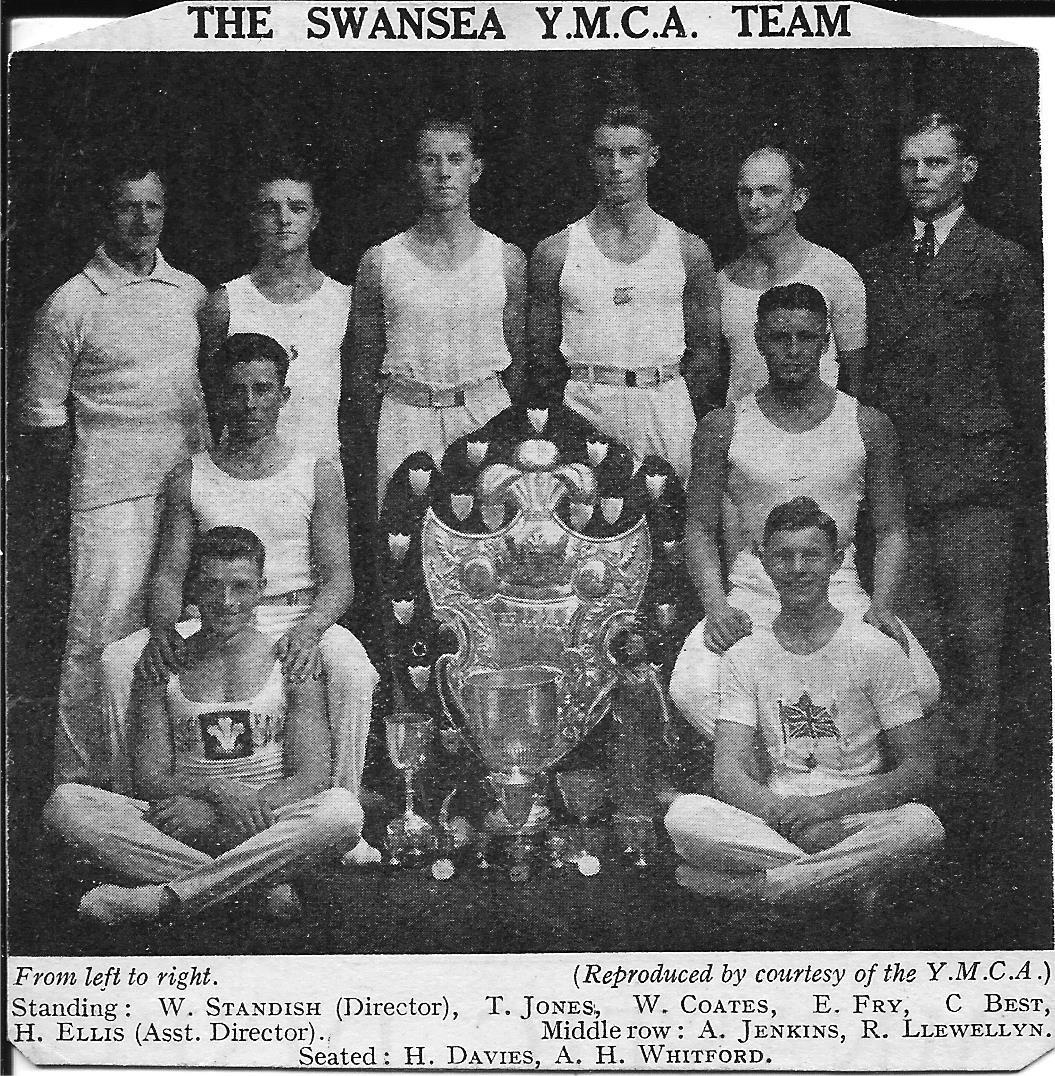 After a few months of intensive training, it became apparent that he was overtaking his club-mates, Cronin, Best and Radford, all of whom were holders of English standard medals.

The curtain-raiser for the season was perhaps the Welsh Individual, when Whitford finished second to Cronin with only a mark between them. This greatly encouraged Arthur and a full-out effort was made, especially on the set work – which of course, was the Olympic set work. The English championship this year of 1928 was held for the first time in Wales, and was staged in Swansea. Being on home ground this did give an advantage to the local gymnasts, but few reckoned on Arthur Whitford who, apart from last year’s English, was still unknown. The man everyone was watching as a possible champion was W. Cronin, the Welsh champion, who was nearly selected for the 1924 Olympic team.

Despite the long journey to Wales, again there was a good entry including the champion, Henry Finchett, and a part title holder – Brown of London. Whitford had to lifted onto the High Bar as it really was too high for him to jump to. It might be mentioned here that his weight at that time was 6 stones 13lbs., so that you can gather what a diminutive performer he was. The contest was very exciting, and being at home, the locals went mad with joy when Arthur Whitford was declared the winner by 3½ points. Afterwards, Brown approached Whitford and shook his hand, saying he had come a long way just to be beaten by a kid.

The next big date on the calendar of gymnastics was the first Olympic trial which was held at the NPI London. Here again, the youngster from Wales was in great form, repeatedly going on the parallel bars to demonstrate the new move in the set, the ‘flying roll’. It was on this occasion that that grand old man Oberhlozer noticed Whitford’s unusual physical strength, and the suppleness suggested that Whitford might be able to do a straight arm lift from half lever on one bar. Within a try or two it was an accomplished fact, and indeed over all the years and after having attended many Continental gym festivals, I have only seen one other gymnast accomplish this very powerful lift and that is our old friend Jack Flaherty.

The trials for the Olympics continued and a last Charles West asked all and sundry at the training centre who would come out top of the British team, whereupon, young Whitford declared that he himself would be top marker, as surely he was, being over 20 marks from the nearest British competitor.

Now he was certainly on the crest of the wave. Bolton, Liverpool, Manchester, London, were among the cities where he retained his English title. He captained the famous Swansea YMCA team, Welsh teams, and it is interesting to note that he was always in the winning team and knew not defeat in any form in this country. The AGA sent him to Paris for the championship of the World. This was a sad story as the set work was mid-interpreted, with the result that he had little chance of making a great impression, but despite this handicap he gained tenth place on the parallel bars out of 100 competitors and actually beat Heikie Savolinen, the ultimate winner, on the pommel horse.

Looking for fresh fields to conquer, he turned his eyes towards Scotland but was told that he did not stand a chance as they would not let the Scottish cup come over the border at any price. What a lot of nonsense this proved to be, as not only were the Scots generous in their praise for this brilliant lad, but the then Hon. Sec. W. C. Young invited Whitford up again, and Bobbie Davie, a previous champion of Scotland, also entertained him. The Tealtean Games in Dublin for the Irish championship welcomed Whitford as a competitor, and again he sweeps the championship, now, of course, being the first champion of Great Britain.

Some of our more fortunate gymnasts of today will be interested in the conditions the lads of those days had to contend with, as Arthur told me this interesting tit-bit. When we got to the gymnasium in Dunlin, we found that the high bar was a wooden one. The contingent from England and Wales decided to chop the wood off and work on the poker-like steel core which was almost unpolished. On this contraption, Whitford did a straddle with combined grasp, a backup and double rear!! Giant change, dislocation, etc., etc., which, under those conditions, was some feat.

Having won the English title nine times in a row, it now became rather monotonous for Whitford, and not having the Continental chances we have today, he decided to finish competing. For two years he was out of the game and then his father persuaded him to have another go for the 1940 Helsinki Games. He agreed, and within three weeks of making this decision he again won the British championship, one of the few to make a successful com-back, and with Mr Standish another plan of campaign was set out. In short, it was for Whitford to win the Gold Medal on the Rings in Helsinki. All who remember him will doubtless remember his artistry on this piece and his tremendous strength; in fact, to this day there has been no person to better his performance on this apparatus. Oddly enough, it was not his favourite piece of apparatus, as he used to enjoy them in this order: Pommels, High Bar, Parallel Bars, and Vaulting, last – Rings. Well, this was not to be, as Mr Hitler had other ideas, and as a competitor, this was the end of Arthur Whitford, one of Britain’s greatest performers.

But he was not by any means out of gymnastics. What of Whitford the trainer? When the war called a halt to competitive gymnastics, his private gymnasium which had grown from an open air effort to a closed in gymnasium called the Sketty Olympic Gymnasium, held almost every Welsh title. Men’s team, Ladies’ team, Men’s and Ladies’ individual, Girls’ and Boys’ individual, Girls team, Club Swinging for boys and men. Then after the war, the gymnasium blossomed forth again and now he had trained his young brother to take his place, and in his first English championship he gained first place and the name of Jack Whitford followed that of Arthur Whitford on that so coveted trophy. In fact, so impressed with the way young Jack was being trained, Henry Bantz predicted a brilliant European future for Jack.

Recognising this flair for teaching in Arthur Whitford, the AGA honoured him by inviting him to coach the men’s team for the London Olympics. Probably one of the hardest tasks ever set for any coach as few, if any, of the lads presenting themselves had had any international experience. The team did not disgrace themselves, but what a bitter blow it was when Jack Whitford broke his wrist and was unable to compete.

A further vote of confidence was placed in Whitford when again he was asked to train the team for the Helsinki Games, and it is gratifying to know that the team did improve and was not outclassed by our foreign competitors.

I asked Arthur which of the pre-war gymnasts he thought would have been able to have fitted into today’s gymnastics given an even chance, and he unhesitatingly said Stanley Leigh, champion of England 1922-23-24, and Jack Flaherty. I then asked him what he thought of the post-war champions and this is the tribute he paid: ‘Every name on the British cup since the war is a very worthy champion, Jack Whitford, Ken Buffin, Frank Turner, all of whom given equal opportunity were of continental class; and of Nik Stuart he has the greatest admiration. It is he said, one thing to have the opportunity and another thing to do something worthy with opportunity, this, Nik Stuart has done, bringing not only honour to himself but to British gymnasts generally; a fine tribute from one great gymnast, to another great gymnast.

Of course, many more pages could be used to tell of this outstanding gymnast’s personality in fact, a book would be necessary, but it would not be right to conclude without mentioning Arthur Whitford’s contribution to Welsh and in turn British gymnastics on the other side. Together, with Bill Buffin, Ken’s father, they were instrumental in reviving the Welsh AGA and Arthur Whitford was the Hon Sec until the Olympics took up his time. Between times, he has been Welsh National Coach and has taken many Welsh teams abroad where they have been well received. He is chairman of WAGA, Vice Chair of the AGA, a life member of the AGA and he has performed a host of duties for the sport.

To conclude, I append herewith a list of some of his achievements:

Written in 1959 by Walter Walsh