Playing football at the local park was one of my favourite things to do, however, the only toilet around happened to be at a building tucked to the side, it happened to by Hinckley Gymnastics Club. I noticed a school friend in a class one day when I was 8 years old and the following week I went with him. My first memorable step into the world of competitive gymnastics was making the East Midlands regional team to compete at the NDP’s at Lilleshall National Sports Centre. I still remember the moment walking into the vast hall that would later become somewhat of a second home, the bright lights, the loud crowd, and action everywhere – I was hooked! 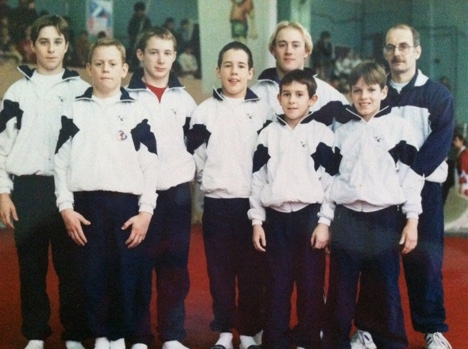 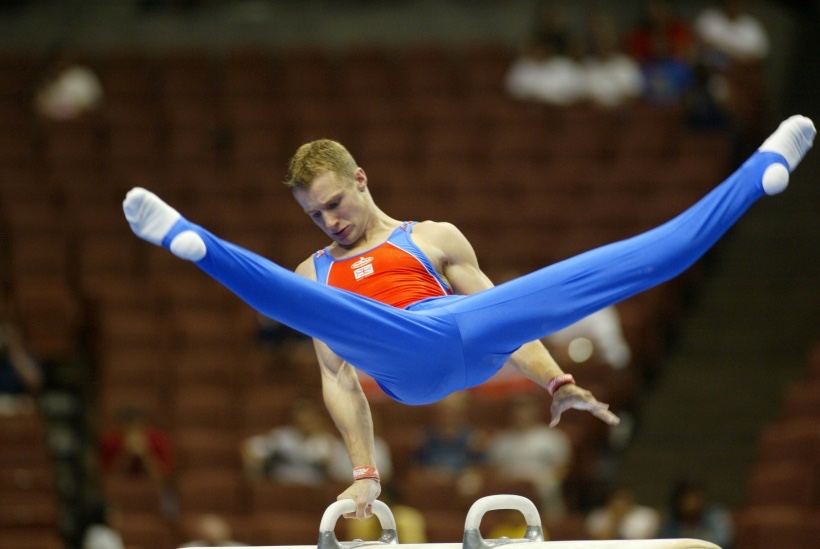 In 1992, my long-time coach Trevor Low invested in me and my teammates by bringing over a coach from Moscow, which coincided with the Barcelona Olympics and Britain qualifying a full men’s team that year. I still don’t know to this day how Trevor pulled it off as Vitaly Lomtiev was part of the Soviet coaching staff and personal coach to various national team members. It was that summer that gymnastics went from something I did, to who I was. I was all in! Later that year we visited him for a week of training in Moscow and made the British national team for the very first time.

Year after year, I kept my head down and worked hard, and each year my ranking improved until I was a key member of the British squad. In 1994 I represented Great Britain for the first time, I was so excited to get to travel to a fantastic junior competition in Kiskunhalas, Hungary. I also remember watching the Commonwealth Games that year whilst at my Grandparent’s house in and decided I too wanted to compete for Wales and made it my goal to be there at the next one. Over the years, Trevor Low gave me and my club teammates everything in terms of allowing us to reach our goals. Hinckley Gymnastics Club, a small industrial town with a gym that didn’t even have a full floor, went on to become the British Team Champions at all levels, including picking up Shield three times in a row. We were fortunate to travel the world, training, competing, watching major international competitions, and meeting gymnastics loving folk all around the world. My debt to Trevor is incalculable.

After various foreign coaches, including George Prodescu (Romania, now Loughborough), one of Trevor’s shrewdest investment was to bring Alexander Sheryeyev to Hinckley, who was coach to 1996 Olympic Champion, Rustam Sharipov. I respect Trevor hugely for realizing he had taken us as far as he could, and in investing in us to bring in some of the best coaching available. From Alex, I learned so much about the technical side of the sport and about training methods and psychology, and he soon became integral in the turn-around of British results into the 2000’s and beyond.

My teenage years saw me collect U16 and U18 apparatus titles and selected to two junior European Championship teams as part of a promising and talented wave of gymnasts, however by the time I turned 20 only three other gymnasts from my generation were still around – this attrition rate from Junior to Senior level was one of the major problems with British Gymnastics at the time and something that had held us back at the Senior level. With Senior results falling short of UK Sport targets, funding was at a low, and I was left with a choice of living at home into my 20’s with a little support from Sport Wales, or take the opportunity to live in California on a full athletic scholarship to attend Berkeley. It was a no-brainer!

Despite being told this was not a good decision by the powers that be inside British Gymnastics, I headed off to California with a point to prove. I knew moving to the US to study was risking my gymnastics dreams of attending the Olympics, but it was the best life decision I could have made. The small industrial town of Hinckley was a million miles away from the life experiences and opportunities that abound in the San Francisco Bay Area. My first summer back, I surprised many by becoming the Senior AA British Champion and punching my ticket to my first World Championships, which in itself was a strange and tough competition. Only a couple of months after 9/11, it was uncertain if they were even going to be held, but in the end, the teams from Great Britain, China (who only sent a young team), and the USA were hosted in a high-security hotel with arm guards on every floor (Japan decided to not attend due to security risks at the time). We were in the 1st qualification session, marching out into an empty stadium at 8:30am in the morning. Having attended World Championships in the past, I was so excited to finally get to walk out on the floor but expectations quickly fell flat when less than 100 people were waiting in the stadium to watch us, and unfortunately, my performance fell flat also. 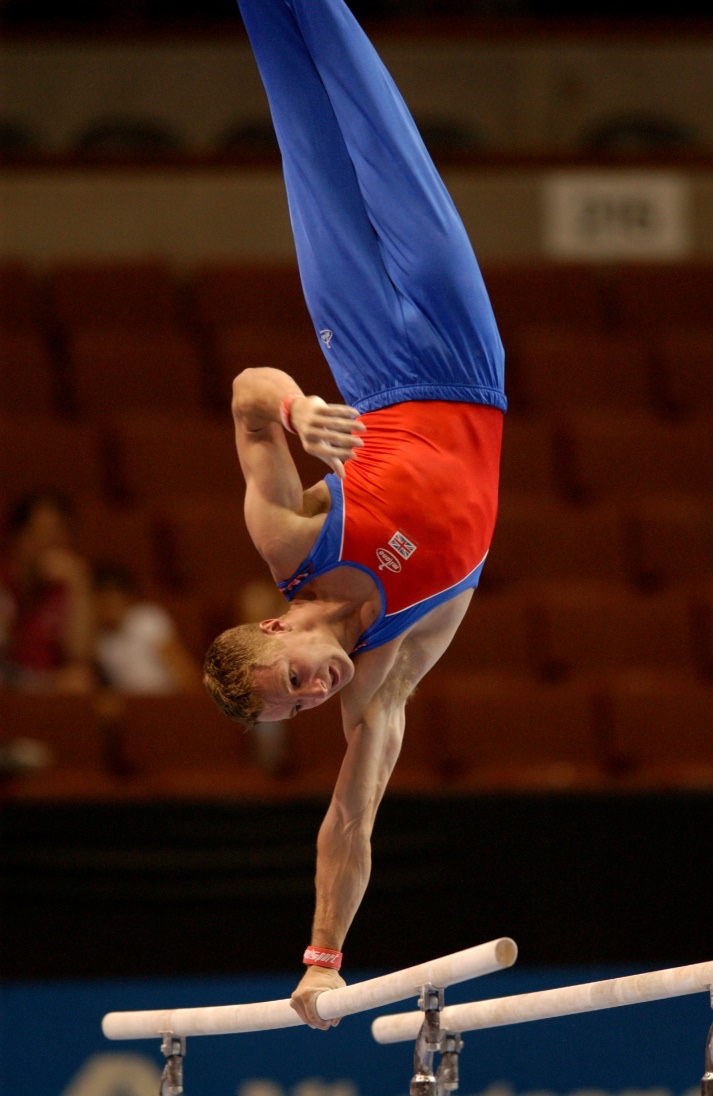 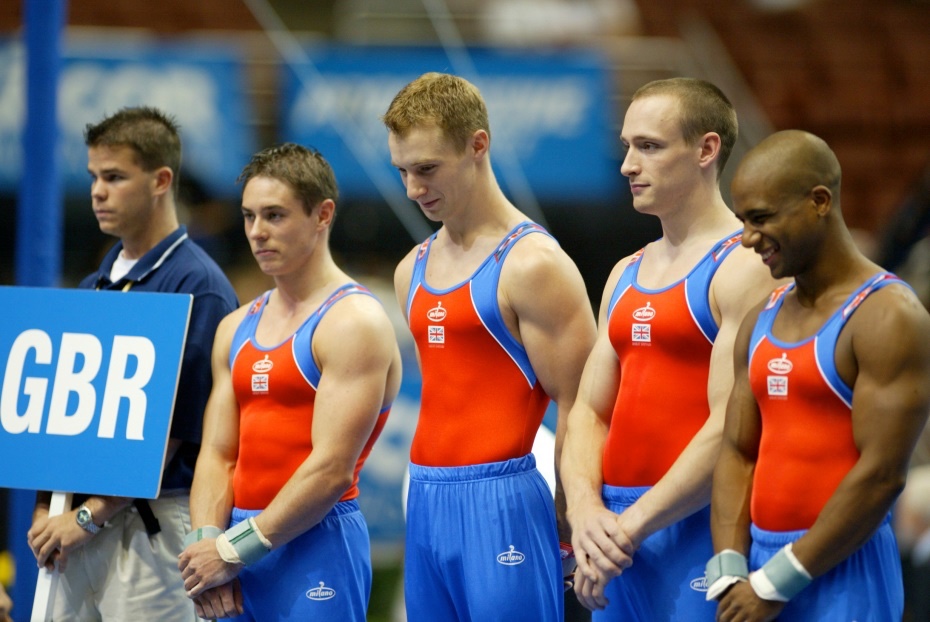 Back in California, things were going well. I felt at home with my teammates and felt fulfilled in my studies. We had an exciting team that boasted junior USA team members and even a former World Champion from China in Jinjing Zhang. Every summer I returned home to compete, and in 2002 had my toughest experience in getting injured two days before the competition began at the Commonwealth Games in Manchester. Wales had surprisingly never won a medal at the Commonwealth Games and going in as British Champion I had high expectations of changing that, unfortunately in life, we get given setbacks and lessons to learn from and four years later, with Trevor there as my coach, I found myself on the podium collecting a silver medal in Melbourne.

In 2003 I got to compete at the World Championships in my adopted state of California. Many of my friends had organized to come and support us. The summer training was grueling, and the team suffered two injury setbacks in a team that was extremely thin on manpower as it was. The significance of the competition was clear; qualification to the 2004 Athens Olympics or British Gymnastics loses its funding from UK Sport. At this time, qualifying at the World Championships was the only chance; finish top 12 for a team in Athens, 13th-15th for two gymnasts, after that it was a handful of wildcard spots for individuals. If we didn’t qualify we knew this would have great impacts on the funding of British Gymnastics, the coaching and administrative staff, and the centralized training set up at Lilleshall would all be hugely effected, which added to the pressure that we already placed on ourselves personally. Training in Anaheim was mixed, but we had an excellent podium training and we were confident, but for many reasons, every one of us fell short of our capabilities as a team. We were crushed and the whole experience to this day feels like a blur. Our life goals and work had been quashed within hours. We finished 23rd and wouldn’t even have an Olympic trial to contend as we would send no one to Athens.

From this low, a clean slate was able to be formed. We did badly enough as a team that many necessary and long overdue changes were made. From this point, I felt my career clearly straddled two major chapters in British Gymnastics history, and it was this latter half of my senior career that I could see how impactful these changes could be (if only they had been in place a decade previously!).

Having graduated in 2006, I returned to the UK to finish my career. I decided to live in London and train essentially on my own in Camden – a life decision which ultimately was not the best gymnastics decision. I found my goal of one final push for a place at the Olympic Games was fizzling out, as the quality of training was nowhere near the level it needed to be. I also had to work and found University Sports Association accommodating to my training and competition needs, but it inevitably became draining to work and try and maintain elite gymnastics. During this period I enjoyed two seasons competing professionally in Germany for FC Bayern Munich and had a fantastic time competing with them as I searched for a similar team environment I grew to love in California.

My final senior international was in Amsterdam, at the 2007 European Championships. Myself and Ross Brewer were all that remained of the old guard, with hugely talented Dan Keatings, Louis Smith, and Kristian Thomas making up the remainder of the team. My younger teammates had a different mentality than what I had been around in previous teams, they weren’t just there to make up numbers, they were there to make finals and bring home medals. The difference in mentality and belief should not be underestimated. It was obvious there was to be much more to come and the remarkable turnaround and success from the British men’s team to me was not surprising.

After retiring from the sport, I returned to California. Back in 2002, I had met an energetic, smart, driven, and beautiful gymnast called Tara. We came to know each other better over cortisone injections that we had on the same day, the joys of our sport! We married in 2006, although we didn’t actually come out as being married until 2017! I have been fortunate to share in so many experiences with her already, and have nurtured quite the love of travelling, from hiking Kilimanjaro to scuba diving with sharks in Borneo and everything in between, we’ve now visited over 30 countries together!

I loved sport and knew I wanted to work within the sports industry. My first career was with the world’s leading rugby brand, Canterbury. Growing up 30 minutes from the town of Rugby and from a Welsh family, I had an advantage! I became the North American Product Manager and enjoyed seeing sport from a different angle. It also allowed me to travel home each year as the headquarters were in Stockport and gave me the opportunity to learn the sports apparel industry and overseas manufacturing. In 2011, on a journey back from visiting factories in China, I sketched out a vision to create my own gymnastics brand, and in 2011, Turn Gymnastics Apparel was formed. I set up the business as a side project, and made its debut at the London Olympics. In 2016, this side project had grown to become full-time job in itself and so I left Canterbury to pursue the growth of my business. Today, I’m extremely proud of what TURN has become; the leading brand for men’s gymnastics apparel, I am excited to see what the future has in store!

My life very much revolves around gymnastics still, not only with my business, but also as a Brevet judge and part-time junior coach at Stanford University’s club team. I stay active and can add a Marathon and Century (100-mile) bike ride to my list of athletic achievements. 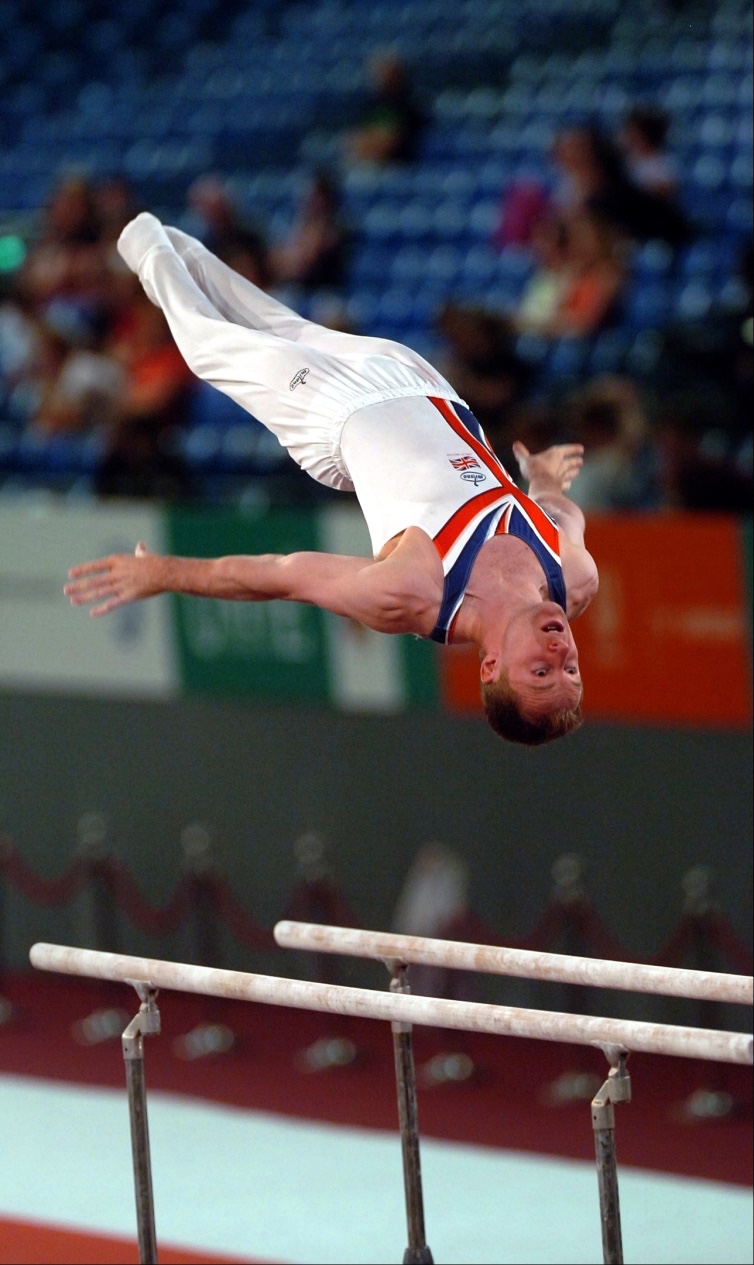