taken from the Gymnast Magazine 1959

In 1932 a very special little boy aged 10 ½ years was given special permission to join the Broad Street Lads Club where his two big brothers were already members. Within 3 months he had amazed his fellow members by gaining 2nd place in the club competition. Such was the debut of Frank Turner in to gymnastics. At this time the London Federation of Boys Clubs held their annual Gymnastic competition and Frank was included in the Broad Street team. 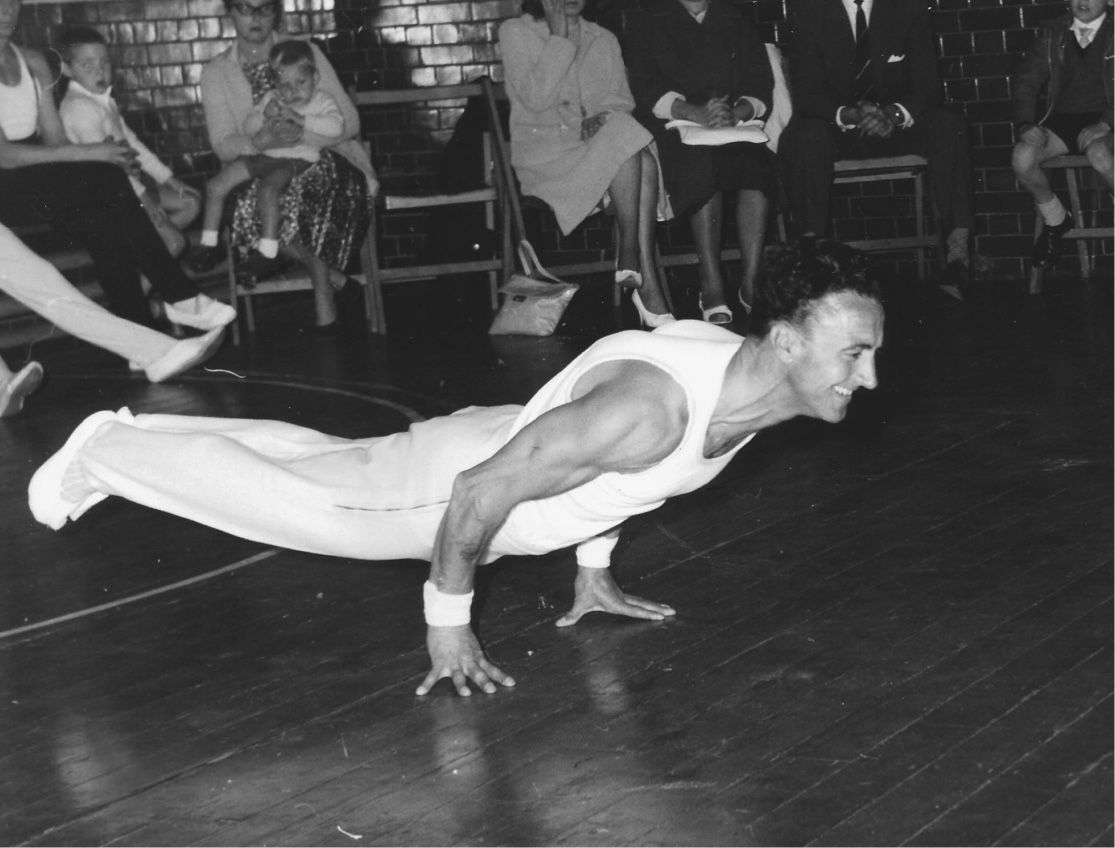 About this time I had the opportunity of seeing young Frank work when I was performing at a special demonstration with Bunny Franklin and Len Quartly who were judging. A few seasons later I was fortunate enough to be asked by Bill Dowing of Broad Street to assist him at coaching the lads. For the next few years, I saw young Frank and his friend and rival Alec Wales grow from strength to strength. Frank made junior history by winning the coveted Oldrieve Cup ( a cup for juniors in the London region ) two years running and only missing it a third time. Due to old age, he was 16 one month before the date of the competition. At this stage, a great decision had to be made for our young gymnast, who was not satisfied with only one energetic outlet to his exuberant spirits and the late Chubby Reynolds had to visit Frank’s mother with the request for her to make up Frank’s mind. Not an easy decision when you realise that he was at this time no mean exponent at diving, boxing, draughts, chess and table tennis. As a boxer, he reached the semi-finals of the London Federation of amateur boxing at the Albert Hall and had also represented the London Football Association.

In spite of these sporting attractions, Frank chose the one which would extract from him the greatest effort and in return give him the most satisfaction. Only the best was good enough for Frank Turner and we are eternally grateful that Frank chose wisely.

Whilst I was in Prague for the World Games, a match was arranged between the Belgians and this country to be held at the NPI (Northampton Polytechnic Institute) and was I believe the first international match to be held in England. Frank was included in the team and needless to say at 15 ½ years he was the baby of the team. He was placed 4th a creditable performance which brought him immediately into the limelight of national gymnastics.

The English Championships (what we now call the British) eluded him during the years before the war. He took the Southern Counties title however only just in time before he found himself enlisted in the Royal Artillery and soon after was posted to Italy. He was eventually wounded and had to invalid home to England with a badly smashed leg. Good fortune was with Frank and upon arrival in England found himself under the care of Dr Bomford who in happier times had devoted much of his time to the welfare of the Broad Street Lads Club where Frank had spent so much of his youth. Progress was rapid under the care of Dr Bomford or Dr Dick as the Broad Street lads had known him. As soon as he was fit again he was enlisted in the APTC where he spent the remainder of his army career in the Display team. The army had their first opportunity of seeing Olympic Gymnastics and it is a pleasant thought that Frank Turner may have given them the necessary stimulus from which grew the great Army Gymnastics team of the present day. Back again to club life he soon returned to intensive training with the result of his immediate selection for the English team against the Belgians in 1947. 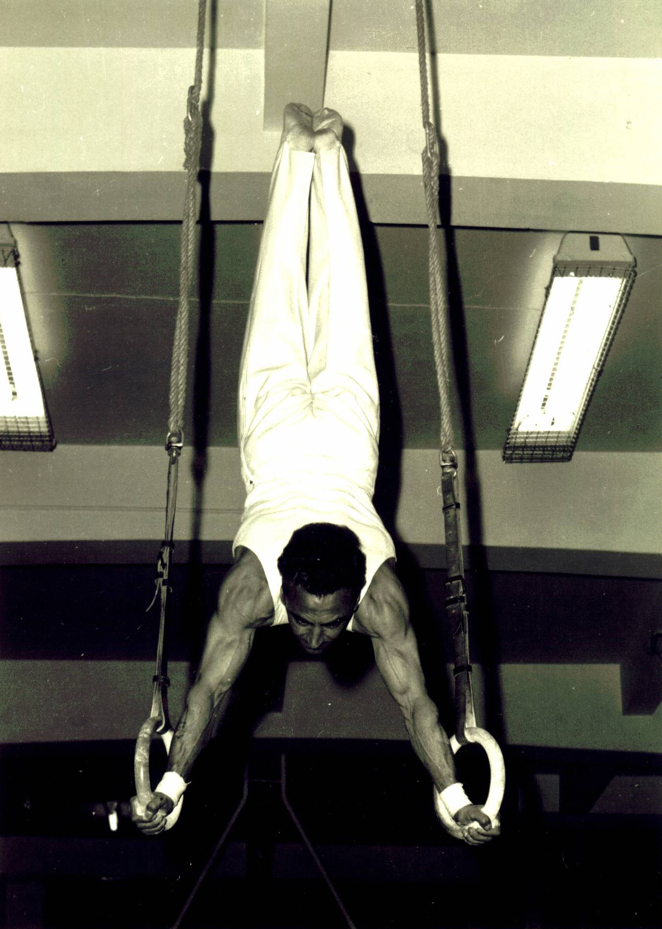 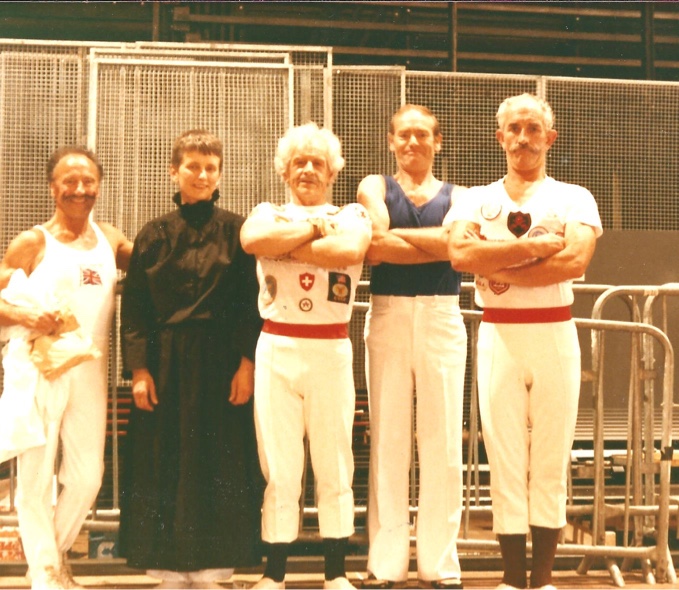 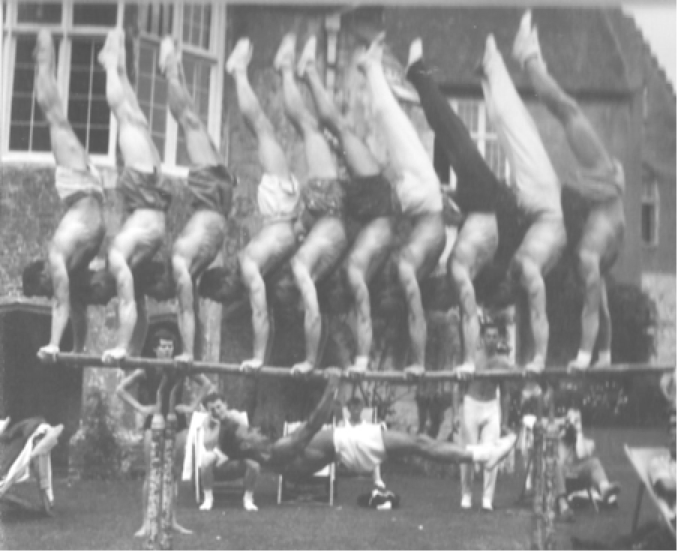 The following year was Olympic Year and was again choice for the British team which fought so heroically but which were so outclassed by the Continentals at Earls Court. During the months prior to the Games, the British team was indeed lucky to meet the great German gymnast Helmut Bantz who at that time was still a prisoner of war. Helmut unselfishly gave much assistance and coaching advice to the British team and in particularly predicted a great future for Frank. Helmut remarked that Frank was a brilliant pupil and used very little strength for his size. I feel that it was due to the encouragement from Helmut that the now famous start to Frank’s voluntary ring work was first evolved. How many times has an astonished audience gasped to see Frank pull from a straight arm hang to half-lever to straight arm above the rings and lift to handstand as if invisible hands were lifting him

The dire shortage of suitable gymnasiums after the war in London caused Frank some embarrassment and training was difficult. the Crown and Manor Boys Club put to his disposal and the good work was continued there. There was a period of displays and demonstrations mostly for the CCPR* who at the time beginning to take a gratifying interest in gymnastics, an interest which has fortunately strengthened.

It was during this time that Frank held the British Championships four times, in 1949, 50 51 and 53. A great performance for a man who was now on the wrong side of 30 years.

He was also showing versatility by competing in the World Games in 1950 was necessary then to take part in 3 athletic events and his ability as an sportsman was a great asset to him.

Frank was always a bad traveller and even a penny bus fare (there used to be such things) upset him. I recall that my mother would care for him before his big competition or display and send him off with motherly words of wisdom and best wishes. Frank has never forgotten these acts of kindness and they remain treasured memories for him.

Now as the evening of Frank’s gymnastic career approaches, the AGA given him the great honour of a fourth Olympiad, this time as the official Olympic coach to visit Rome this year. What a great record of achievements this is, 1948 London, 1952 Helsinki, 1956 Sydney and 1960 Rome. All since his shattered leg received in World War II. It is hoped that future British gymnasts and athletes will inherit Frank determination and spirit. Bill King 1960.

Foot-note
Following the Rome Olympics, Frank became a brevet judge and was always a familiar figure on the gym floor judging at regional, national & international events. He took part in the BAGA Centenary display depicting 2 gymnasts from different eras performing on the rings. Frank was always smiling and giggling and always loved to meet up with everyone. His great desire was to be a torch-bearer for the 2012 Olympics but unfortunately, he died shortly before the games. He was however interviewed by the BBC shortly before the Games along with George Weedon, another member of the 1948 team. 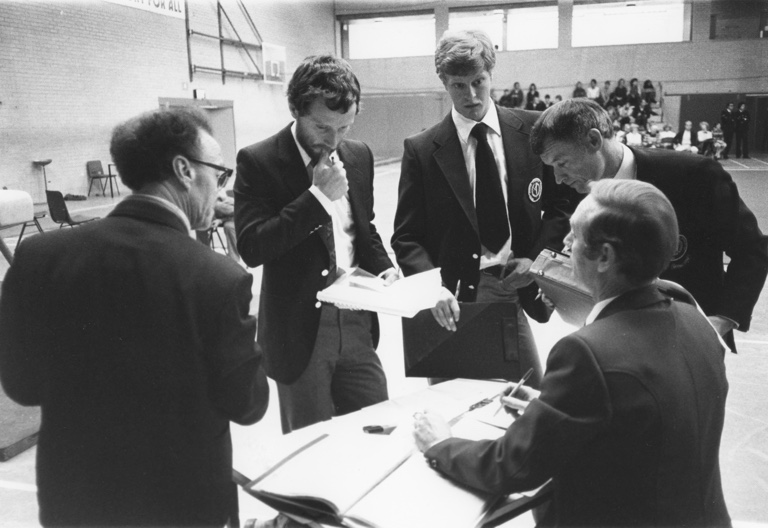 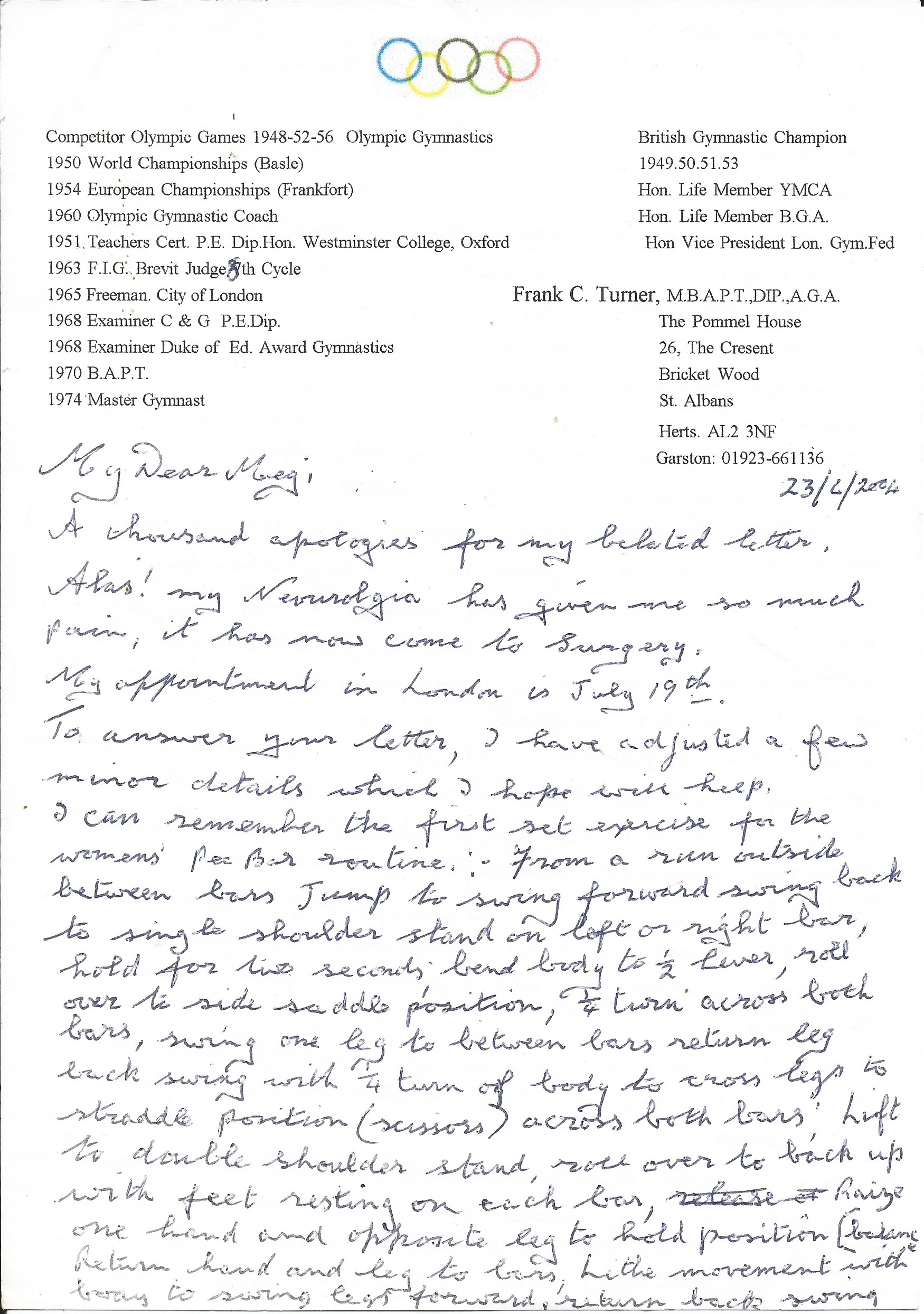 I wanted some information about the 1948 Olympics. He wrote me the following letter in June 2004. (Meg)

My dear Meg,
A thousand apologies for my belated letter. Alas! My neuralgia has given me so much pain; it has now come to surgery.
My appointment in London is July 19th.
To answer your letter, I have adjusted a few minor details which I hope will help. I can remember the first set exercises for the women’s P bar routine: – From a run outside between bars jump to swing forward swing back to single shoulder stand on left or right bar., hold for two seconds; bend body to ½ lever, roll over to side saddle position, ¼ turn across both bars, swing one leg to between bars, return; leg with ¼ turn of body to cross legs to straddle position (scissors) across both bars. Lift to double shoulder stand, roll over to back up with feet resting on each bar, raise one hand and opposite leg to hold position (balance) return hand and leg to bars. Slight movement with to swing legs forward, return back swing carrying both legs and body with ¼ turn on to one bar, overthrow or short arm over throw to ground. End.

The 1952 Games Helsinki was the inauguration of the Code of Points; now known as the FIG code of Points.

The reason it came because no directive came from the committee of the 1948 Games, whereby the British were doing a marathon of moves on every apparatus 12 – 15 moves; and the Russians doing half the amount.

Not sure who he is referring to here as there were no Russians at the 48 Games, the Soviets appeared at 52 (Meg)

During debating, arguing better word, The Russians said show us where they say how many moves should be performed. Hence the birth of the FIG rules came about in 1956 proper.

The then tactics came about when I in with the Russian squad accidentally when they were discussing the orders in which their squad performed. Blatant, it was exposed on the rings when the performed one from last. A little information.

When the 1952 Helsinki Games were over a number of countries, the Elite, formed a committee including Switzerland, GB, Russia, Finland, Japan, Germany, America, remember any more. (Not sure what this committee was all about)

Frank Edmonds, Frank Turner (self) and Harold Moore were the first to hold a Brevet judge card honorary given by the committee for services rendered.

The FIG then decided in future they will hold an examination, (for judging) the first to be held in Switzerland every four years.

Frank left at the Centenary display, Meg Warren Nik Stuart, Dickie Russell Bill Cosgrave, George Kunzle, Bill Williams, Bernard Thomas Frank Turner & I think Bill King was invited to take part, I could not afford it at the time so declined the offer.

When they returned they set about holding an examination course sanctioned by the FIG. It was held at the BAI (Birmingham Athletic Institute) run by Kunzle and Bernard Thomas – Do you know Meg! I cannot remember in all my career Bernard Thomas ever judging albeit he’s a nice chap.

I’m hoping to travel to Scotland for Nik’s 2nd Anniversary (death of Nik Stuart) in July, then again to Birmingham organised by the BAGA. What a mess this Bi organisation is, I have tried many times speaking with people to clear the ambiguity as Nik did so much for British Gymnastics.

And people now, like your dad, mum, Bunny, yourself, John Atkinson, Alan Sommerville and many others.

I hope I haven’t bored you with the history and love of Gymnastics but there it is Meg.

* The CCPR was the Central Council for Physical Recreation, the fore-runner to the Sports Council or UK Sport.