Company Sergeant Major Instructor Wray Stuart, MBE, alias “Nik” became a gymnastics legend during the fifties and sixties. He first came to prominence quite suddenly during the 1955 British Championships. Favourites in those championships had to be the two veterans, cockney Frank Turner and Welsh wizard Ken Buffin. Both had served British Gymnastics well for nearly ten years.

The venue for that momentous event was the Central YMCA, London, now demolished. The packed audience of 350 enthusiasts had each paid a shilling entrance fee. I remember it well because I was the fellow selling tickets at the door. Our record gate money that day – £17.13s.91⁄2d., put the Association back on its feet, but I never discovered how that ninepence ha’penny got there!

It was soon apparent that the two veterans and the new boy were going to take the honours, first Turner then Stuart took the lead in turn, with Buffin menacingly at No. 3.

Frank Turner has held the British title many times, but Ken Buffin had been denied the honour and so it was quite natural for that London audience to share its support between their local hero and the likeable Welsh gymnast. As for the new boy “Stewart” – that is how the programme mis-spelt it that day, we grudgingly admired his skill, his immaculate style and clean cut gymnastics, but who was he, and where did he come from?

And so as the last item – the High Bar began, were reluctantly preparing to accept this new unknown as champion. But, wait; hadn’t we all forgotten one thing – the High Bar was the Welshman’s favourite piece, and it was now apparent that he had been playing a waiting game. During the last ten minutes of that memorable competition, Ken Buffin performed near miracles on the High Bar and for the first time squeezed into the No 1 spot – and that was it, he was champion! Not even the most ardent Turner fan begrudged Ken his great moment, but on our way home that evening one name was in everyone’s mind – “Stuart”. – Again and again the question was asked: Who was he, and where did he come from?

Fifteen years earlier, during the first years of the war, young schoolboy Stuart would have been seen running alone across the rolling moors of his native county, Yorkshire. The sport of jogging was not in vogue then, but for a young boy seeking fitness, there was little else to do in wartime Britain.

By the time war was over, Stuart was a private in the Parachute Regiment and if that was not exciting enough, he also represented his regiment at boxing. For a year he boxed and never lost a contest. But he was not satisfied and seeking more competitive activity he transferred to the Army Physical Training Corps in 1948. Soon he was in Singapore and Malaya and here his amazing virtuosity became apparent when he represented his regiment at high diving, winning the event with a full twisting one and a half somersault dive. Then shortly afterwards winning the Malayan Athletic championships pole vault title with a record vault over 12 feet. And amid all this activity he found relaxation during his free moments with hand balancing and tumbling. After serving with the KOYLI, Royal Marines, Green Howards and 2 years with the Gurkhas, he returned to Britain in 1953 and realised that tumbling and hand balancing was just a prelude to the wonderful sport called Olympic Gymnastics and here was the challenge he had been looking for. Back at Aldershot, the home of the Army school of PT, Stuart found many kindred spirits among his soldier comrades and in particular two Sergeant Instructors – Dick Gradley and Jack Scrivener who with Tommy Slaven and Jim Pearson started pushing the sport with maximum determination. 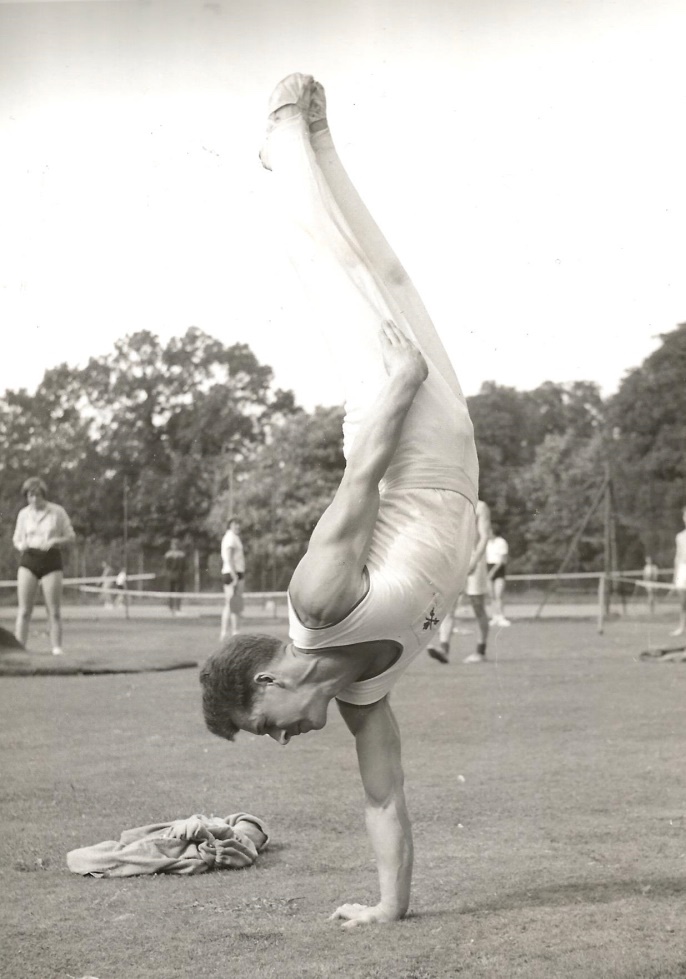 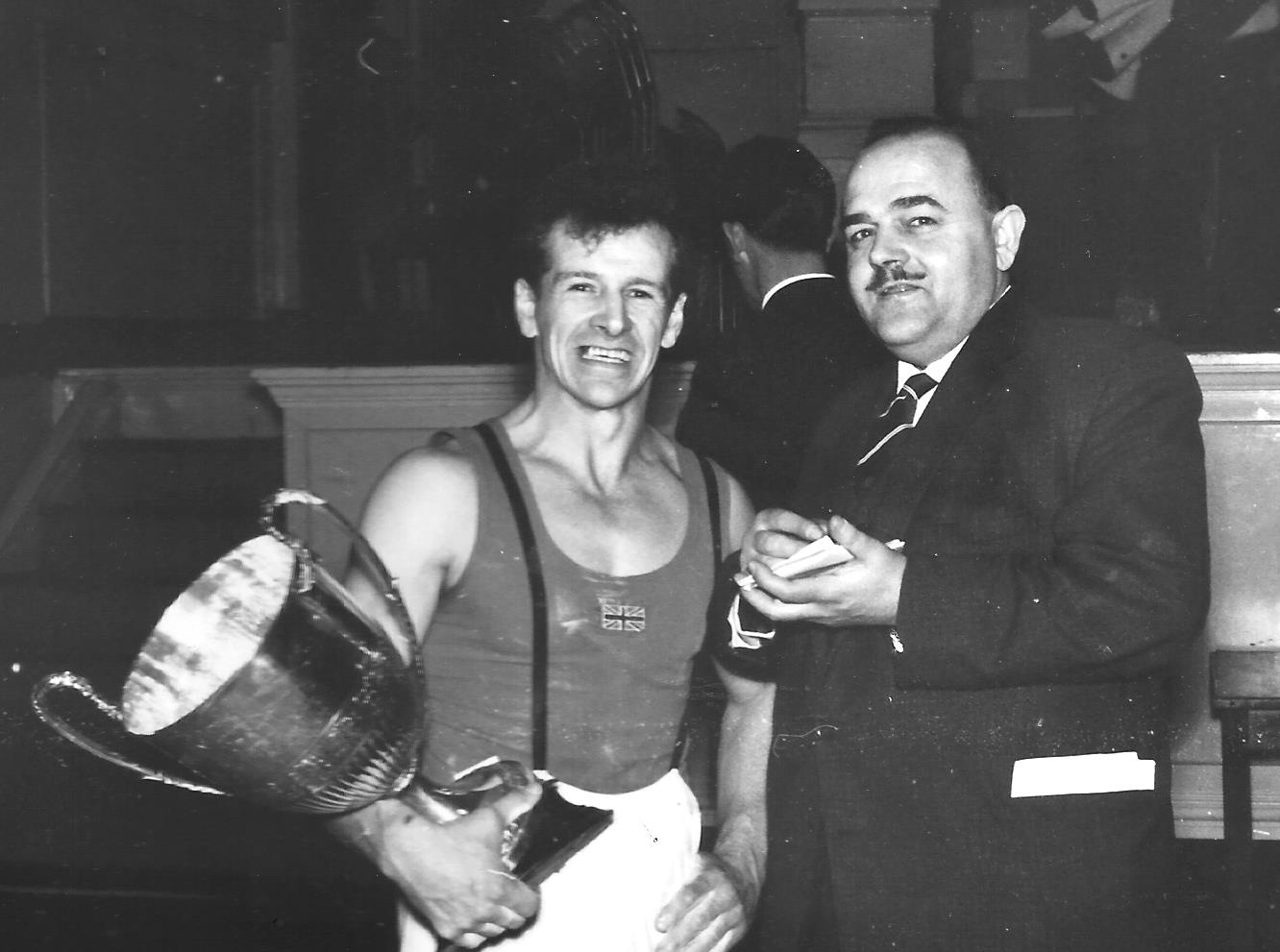 Nik at the Albert Hall with British Championships trophy and talking with Frank Taylor. 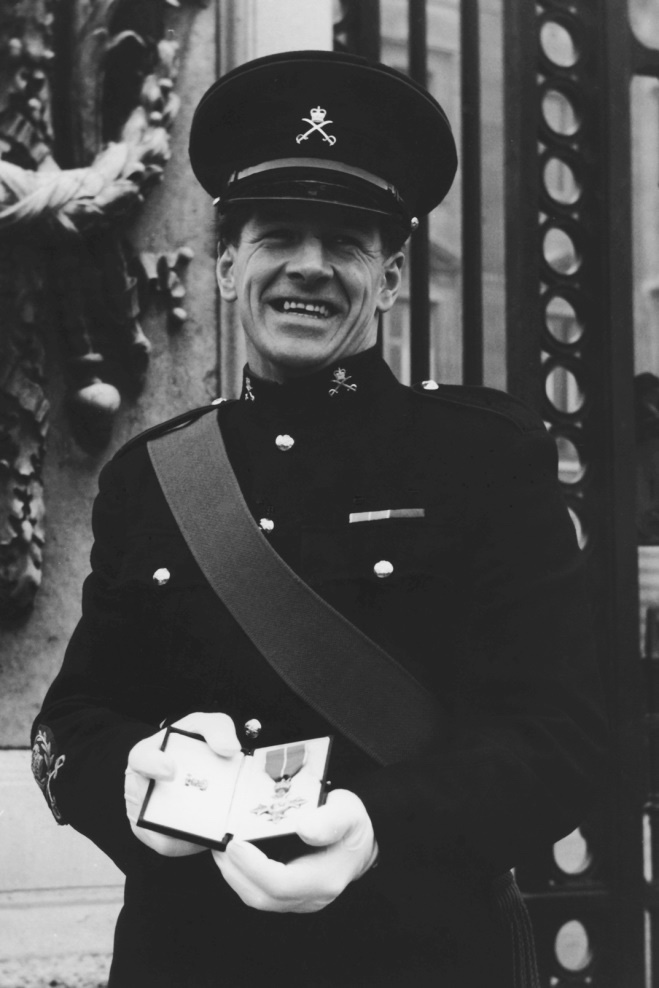 Nik Stuart collecting his MBE for services to gymnastics.

What either of these two worthies may have lacked in gymnastics coaching technique, they made up for in sheer common sense and hard work, and with the help of a very secret coaching aid which I overheard many times; it was “Get up there and do it again!” – and it seemed to work because two years later, Stuart was at his first British Championships and, as you now know, he lost it to Ken Buffin. But it was the beginning of one of the greatest careers in British Gymnastics. Stuart – shall we call him Nik now? Well Nik never again lost a British contest, and remember his gymnastics career began when he was 27 years of age!

If Nik was late starting, he very quickly made up for lost time. During that same year, 1955, Nik and Frank Turner travelled to Frankfurt for the European Championships. Sadly Nik suffered one of his very rare injuries and was unable to compete.

So, whilst Frank Turner was performing brilliantly and coming 25th overall, Nik was making good use of his enforced inactivity and taking his first look at world level gymnastics, studying the style and technique of Europe’s top exponents. Two years later, he was to put his studies to good use. At the European Championships in Paris, Nik took the silver medal for the floor exercise. It was an incredible performance unequalled by any British gymnast before or since. His overall position was a modest 18th, but he soon made amends and at the Copenhagen Europeans in 1959 came 5th Overall. With him on that great occasion, was another product of that Aldershot school – Dick Gradley, who came 22nd overall.

Whilst Nik was fast earning a great reputation as Britain’s sports ambassador at international level, back here at home he was becoming a hero figure for every British school boy and girl. Nik and his army buddies from Aldershot had improvised a travelling circus of performers and demonstrators who went freely to schools and clubs spreading the gospel and giving untold gymnastics pleasure to future generations of young gymnasts.

It should be remembered that gymnastics, at that time, was not readily accepted as a suitable sport at school level. So Nik and his friends were selling our sport where it was to achieve great results in the years that followed.

It was during this time that a great gymnastics event occurred: the British Championships were to be staged at London’s Royal Albert Hall. The first of these was in 1961 and, of course, Nik was there. Together with two fantastic schoolgirls, Monica Rutherford and Denise Goddard, he captured the hearts of a spellbound 6,000 audience – remember our previous record ‘full house’ was 350 at the YMCA?

I recall clearly the following year when television covered the event for the first time. It seemed that we were to share the programme with horse racing at Newmarket, and it was expected of us to provide our gymnastics highlights to conveniently fit in with the action at that event. Well, Stuart was in his element. He loved an audience and always made sure that they got their money’s worth. He was just about to start his Pommel Horse exercise when the television producer, who complete with earphones and monitors was watching the action at Newmarket, held up his arm and shouted – “Hold Stuart!”

So Nik hung around for a while, then went for his second chalk up. “Keep holding Stuart” repeated the man. The 6,000 fans were beginning to get restless. Stuart came back for a quick look at the action on the monitors and to his amazement saw some horses being paraded round the paddock while the odds on the race were being given. It was too much for Nik. As the man was calling “Hold Stuart” for the third time, Nik walked out to the pommel horse. He stared at it for a few moments. He walked round the animal carefully inspecting each end. Then he turned to the judges and addressed them in a whisper that was heard in the back row of the gallery: “Which end do you feed this brute?” Well the audience just loved it and the man at the monitor fell about with laughter. He promptly forgot all about his gee- gees at Newmarket and turned his attention to the one that Nik was just about to ride: “OK Stuart, You’re ON!”

For nearly ten years, Nik clowned his way through countless audiences giving enjoyment and always gymnastics at its best. He believed, as I hope we all still do, that gymnastics is fun.

And so in 1962 the Queen presented Nik with the highest honour – the MBE for his services to gymnastics. Two years later when he was 35 years old, and seemingly at his peak, the Association appointed him as National Coach for Great Britain. This too was a great honour, but alas for us, it meant we would never see him compete again.

His task as National Coach was almost an impossible one, lecturing and demonstrating all over the British Isles and then coaching the National Squad whenever they could come together. I remember one such occasion when I saw him perform again. It was at an old swimming baths at Lewisham where once thrived a very fine gym club. The squad were having a very difficult time with the Olympic compulsory exercises. “Can you show us once again, Nik ?” And 45 year old Nik Stuart remembered that secret training aid way back from his Aldershot days – “Get up there and do it again!” and he did!

It is fitting that he should crown an unsurpassable career by winning the German Turnfest in 1963, but ask him and he will tell you his finest moment was winning the Championships of the Canary Islands in a gym laid with glazed tiles and where to this day his picture hangs, many years later – he gets you like that!