Pat Hirst’s sporting career started many years ago. In fact so many that she was loathed to tell me just how many.

Strange as it may seem, this young lady who was later destined to compete in three Olympics, represent her country in many international competitions, and to hold the British Gymnastic title 8 times, had little love for the greatest sport of all. In fact, as a young schoolgirl, Pat, like many young girls and boys of today didn’t quite know what gymnastics were. 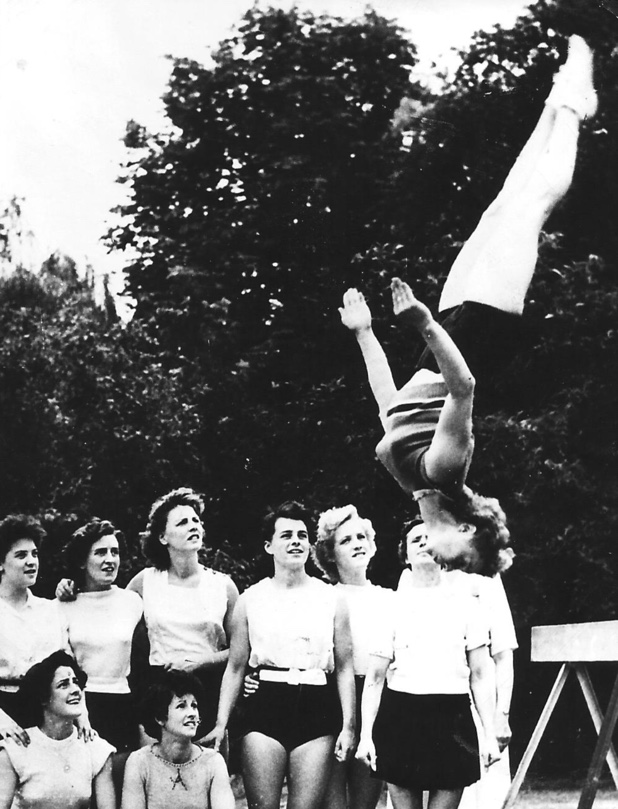 Whilst still at school, she did almost everything, swam, played cricket, tennis, netball, and athletics. On leaving she joined the Leeds Athletic Club where she became a promising sprinter. Netball still held its interest, and during the winter months would visit a gymnasium in Leeds, the Woodhouse School of Physical Culture, where training would continue three nights a week. It was not long before the combination of Pat Hirst and a gymnasium began to have its obvious effect, and soon our future British Champion had to make the vital decision. Fortunately for gymnastics, our heroine chose the toughest sport of all.

It was during 1936 that it can be said that her gymnastic career started. Perhaps it was the thrill of the Berlin Olympic Games which finally set off the spark of enthusiasm, for she decided then, that one day she would take part in an Olympic contest.

The next two years were spent training hard, entering every competition and championship, The Yorkshire, Northern Counties and British Championships. Pat became Yorkshire champion in 1938 and received her first Union Jack for an International against Belgium.

Then came the war. Pat’s former coach Jim Atkinson asked her to judge a local club gymnastic competition and then invited her to go back to the gym. It was not long before the old enthusiasm returned, but to her surprise and disappointment, her gymnastics did not. Pat’s performance was very poor and she had to start at the bottom again. Her recovery must have been rapid for that year brought her the Yorkshire Championship for the second time and that most coveted title, the Champion of England. The greatest name in ladies’ gymnastics at that time was Clarice Hanson, and Pat, in beating her had indeed reached the top. It is to her credit that Pat feels Clarice Hanson was unlucky on that day. She was leading all through the competition and then missed a vault which lost her sufficient marks to give Pat the British Championship, but then that is gymnastics, and Pat was to face the wrath of Lady Luck many times during the next ten years. The following year, the scales of fate swung the other way, for a dislocated elbow gave the championship to Clarice Hanson. But it was now year, and the dreams of the young schoolgirl of 1936 were to come true.

e Ladies Olympic event was a team competition only, no individual medals were awarded, but many months later, Miss Taylor, that beloved lady of gymnastics, told me that Pat Hirst’s position in the compulsory vault was second in the world, losing first place by .05. See Note 1

The next four years saw a series of titles and championships come the way of our gymnast. It seemed that nothing could stop her being British Champion year after year. But something did. Walter Walsh and Cissie Davies managed to thwart Pat’s progress for just one year, and the British title went to Swansea for the first time, in 1951. The following year saw further honours come the way of our determined girl from Leeds. The British Championship came back with a vengeance, by a margin of 24 points. Again it was year, and in spite of injury and doubts of her fitness, Pat was again the obvious captain for the British team which boarded the plane for Helsinki.

The Olympic year of 1952 saw the return of the High and Low Bars, a piece of apparatus seldom seen in this country. Nevertheless, Pat who by now was ten years older than the average age of the team, mastered this new and difficult obstacle, and so rightly deserved her popularity in the team, for she so readily passes on her experiences and gives encouragement to the younger team members. 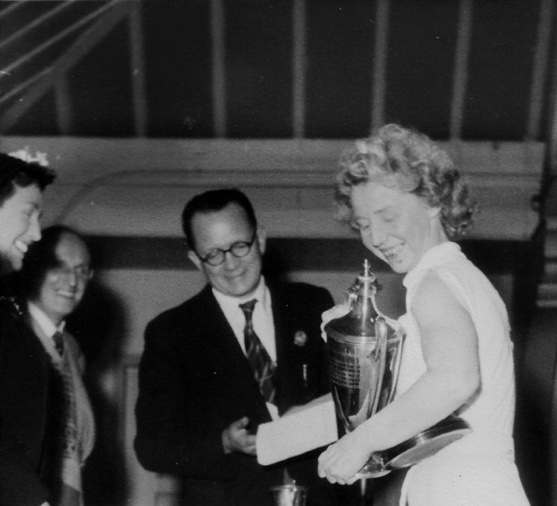 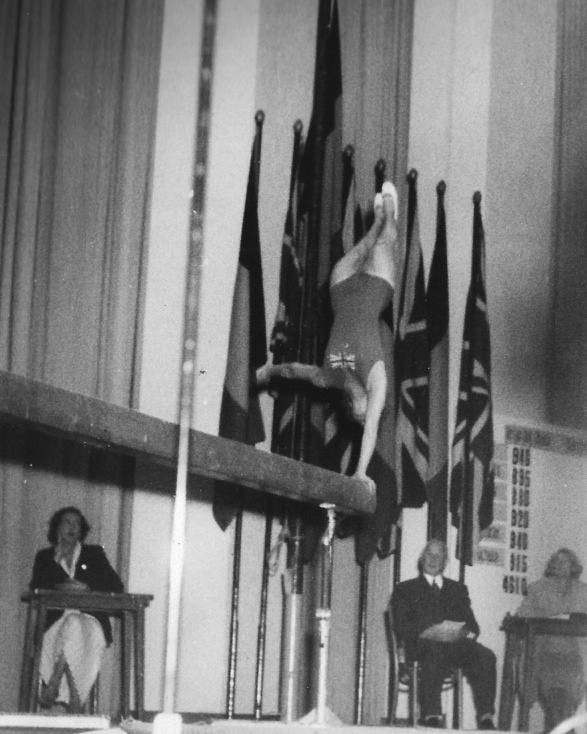 The Games in 1956 were held in Melbourne, Australia, and because of the expense involved, only two men and one lady were to go, together with a team manager. The few months prior to the final selection were a nightmare for the three lady gymnasts, whose hearts were so set on realising the greatest honour a sportsman or sportswoman can earn. Gwynedd Lingard, Margaret Neale and Pat Hirst. Trial after trial was arranged by the selectors in the hope of choosing the one to fly to Melbourne, but the girls from Wales were not intending to lose that honour without a determined fight.

When Nick Stuart, Frank Turner and Frank Edmonds boarded the plane for Melbourne, they were accompanied by Pat Hirst, who with Frank Turner, have between them made Olympic Gymnastics history by competing in a total of six Games.

After the Melbourne visit, she decided that active gymnastics were at an end, and hoped to concentrate on coaching, but in 1958 after a year of inactivity, she again succumbed to the call of competition. Alas for our story and Pat. Margaret Neale was on her usual good form, and in Pat’s own words “truly deserved to win.”

So Pat’s ambition of 1936 had been surely exceeded, threefold. One might imagine that she had given enough to the toughest of all sports, but it is not the end. Pat has one further ambition, to coach an Olympic team, and if she applies the same determination during the years to come as she has done during the past, then, I think her last ambition will be realised.

Notes
1948 We would have had a silver medal tied on vault if there had been an Individual Apparatus Championships.

Pat Hirst Obituary
Gymnastics Olympian Pat Hirst has died at the age of 77. Pat remains the all-time women’s British Championships record holder for gymnastics with 8 wins. Pat was born in Wortley and lived all her life in Leeds. She was a British Team member for 18 years, a remarkable career that started in 1938 in Belgium. Pat competed at 3 Olympic Games, London in 1948, and Helsinki in 1952 when she was captain and she was the sole woman to represent British Gymnastics in Melbourne in 1956. Between the 1952 and 1956 Games, Pat had to change from parallel bars to asymmetric bars. floor also replaced the team floor but Pat excelled at every event with a back away from the swinging rings that could put the current men’s world champion to shame. Pat continued to work for gymnastics only after her performing career had ended as a successful coach and as an administrator and example for everyone in the sport to aspire to.

Further notes
It is confusing regarding the apparatus used from 1936 – 1952.

It seems that this was with a spring-board and may have been a higher horse judging by film taken at the ’36 Olympics.

Beam Compulsory exercise. Voluntary exercise It said in the rules that the beam was 4cms wide Looking at photos and film it is obviously 4 inches wide.

The talk of the sudden change from P bars to A bars was possible that federations or just the AGA were led to believe that the apparatus for 52 would be P bars even though they had not appeared in the 1948 programme. It was only one year before that the decision was made to make the Asymmetric bars the new women’s apparatus. Gwynned Lingard spoke to me regarding this sudden change. 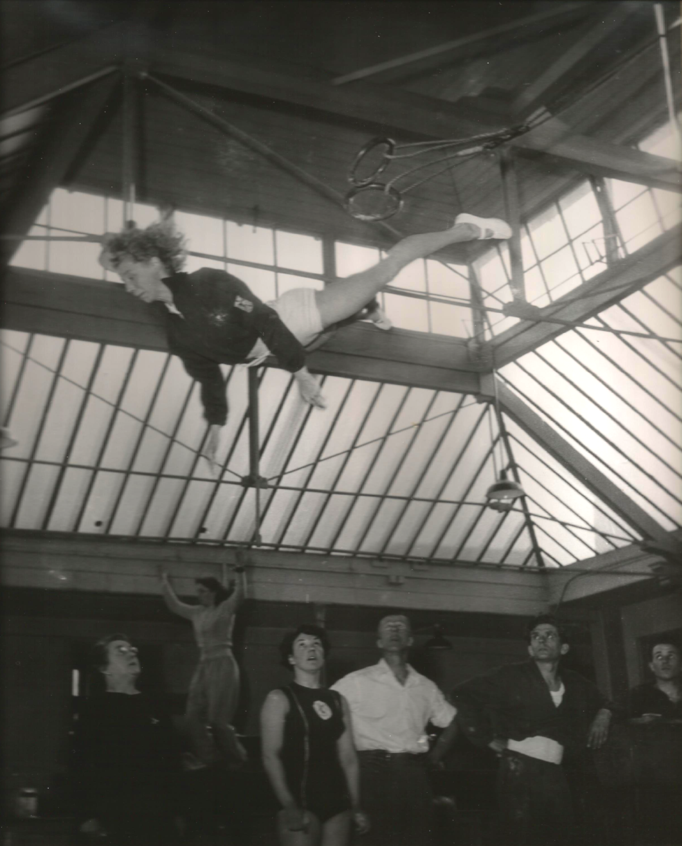